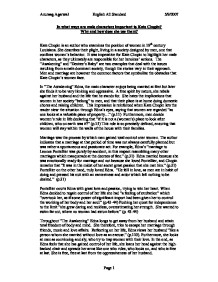 In what ways are male characters important to Kate Chopin?

In what ways are male characters important to Kate Chopin? Why and how does she use them? Kate Chopin is an author who examines the position of women in 19th century Louisiana. She describes their plight, living in a society designed by men, one that confines women's behavior. It was imperative for Kate Chopin to highlight her male characters, as they ultimately are responsible for her heroines' actions. The "Awakening" and "Desiree's Baby" are two examples that deal with the issues resulting from a male dominant society, though the stories vary in their approach. Men and marriage are however the common factors that symbolize the obstacles that Kate Chopin's women face. In "The Awakening" Edna, the main character enjoys being married at first but later she finds it to be very limiting and oppressive. A free spirit by nature, she rebels against her husband and the life that he stands for. She hates the implications that women in her society "belong" to men, and that their place is at home doing domestic chores and raising children. ...read more.

(p.31) Pontellier on the other hand, truly loved Edna. "He fell in love, as men are in habit of doing and pressed his suit with an earnestness and ardor which left nothing to be desired." (p.31) Pontellier courts Edna with great love and passion, trying to win her heart. When Edna decided to regain control of her life she had "a feeling of exultation" which "overtook her, as if some power of significant import had been given her to control the working of her body and her soul." (p.43-44) Pushing her quest for independence to the limit "she grew daring and reckless, overestimating her strength. She wanted to swim far out, where no woman had swum before." (p. 43-44) Throughout "The Awakening" Edna longs to get away from her husband and attain total freedom of body and mind. She therefore, tries to escape her marriage through friends, music and love affairs. Reflecting on her life, Edna views her husband "like a person whom she married without love as an excuse." ...read more.

Therefore Armand's falling in love was described as an "avalanche, or like a prairie fire or anything that drives headlong over all obstacles." Armand idolized Desiree but his attitude changed when she gave birth to a black skinned baby. He was arrogant and overconfident of himself and his heritage, and was sure that the fault was Desiree's never questioning his own ancestry. By jumping to conclusions he never gave her a chance to explain herself to him. At the end, Desiree who had been overwhelmed and desperate drowned herself and her baby. Kate Chopin developed her female characters as reaction to male attitudes. She used men, marriage and the rules by which women were confined to demonstrate her point. She described men as the ones who placed obstacles in women's way, created social rules and put restrictions that confined their lives. These boundaries were at times physical but almost always emotional, and eliciting defiant behavior and reactions from the women involved. Placed by men, these limitations helped in shaping the female character of Kate Chopin's heroines in her stories. ?? ?? ?? ?? Anuraag Agarwal English A2 Standard 5/9/2007 Page 1 ...read more.