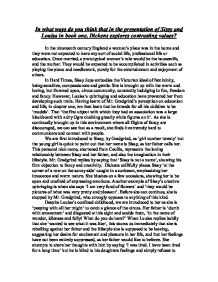 In what ways do you think that in the presentation of Sissy and Louisa in book one, Dickens explores contrasting values?

In what ways do you think that in the presentation of Sissy and Louisa in book one, Dickens explores contrasting values? In the nineteenth century England a woman's place was in the home and they were not expected to have any sort of social life, professional life or education. Once married, a prototypical woman's role would be the housewife, and the mother. They would be expected to be accomplished in activities such as playing the piano and needlework, purely for the entertainment and enjoyment of others. In Hard Times, Sissy Jupe embodies the Victorian ideal of femininity, being sensitive, compassionate and gentle. She is brought up with the warm and loving, but frowned upon, circus community, constantly indulging in fun, freedom and fancy. However, Louisa's upbringing and education have prevented her from developing such traits. Having learnt of Mr. Gradgrind's perception on education and life, in chapter one, we then learn that he intends for all his children to be 'models'. That 'the first object with which they had an association was a large blackboard with a dry Ogre chalking ghastly white figures on it'. As she is continually brought up in this environment where all flights of fancy are discouraged, we can see that as a result, she finds it extremely hard to communicate and connect with people. ...read more.

This represents her suppressed passion and also shows her to be very reflective on her life and future. Louisa looks down when Gradgrind looks at her avoiding eye contact, implying her loneliness and detachment from any form of close connection between human beings. Chapter nine consists of a conversation between the two girls. When Sissy confides in Louisa about making mistakes in school lessons, Louisa replies with comments such as 'that was a great mistake of yours', demonstrating that although she feels trapped and suffocated by the system she lives in, she is still a part of it and behaves like she is expected to. Sissy's thoughtful and caring character is reinforced when she tells Louisa of the answers she gave to Mr. M'Choakumchild's statistical questions in school. For example she replied to one of the percentage questions by saying 'it must be just has hard upon those who were starved whether the others were a million or a million million'. Sissy cares too much about the people involved even though they are simply examples. As the girls' conversation develops, Louisa asks poses questions to Sissy 'with a strong, wild, wandering interest peculiar to her; an interest gone astray like a banished creature, and hiding in solitary places. She is very curious towards matters such as family, relationships and love, and asks questions such as 'Does your father love her?' ...read more.

Louisa knows what Sissy is thinking without even looking at her, and this shows a subconscious connection between the two girls, both knowing that Louisa has entered a loveless marriage and will be trapped for the rest of her life. The chapter ends by telling us that 'from that moment, she was impassive, proud and cold-held Sissy at a distance-changed to her altogether. Louisa detaches herself from Sissy because the girl represents everything that Louisa is missing and wanting in her life and having Sissy around constantly will only remind of her of the life she is desperate for but unable to lead. In conclusion, by comparing and contrasting the characters of Sissy Jupe and Louisa Gradgrind, we can quite clearly see how Dickens has explores their different values and the types of people that they represent. Sissy is kind, gentle, considerate, imaginative, sensitive and emotional and it is clear that once she is married she will be the 'angel in the house'. Although the reader will overlook Sissy as the model girl of how everyone should be, it is Louisa who is the typical Victorian woman, being a victim of Utilitarianism system. She has no close relationships with others and finds it very difficult to express her feelings and emotions. Her life is based on facts, just as her father wishes for it to be. ...read more.