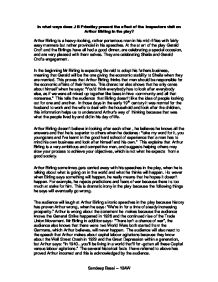 In what ways does J B Priestley present the effect of the Inspectors visit on Arthur Birling in the play?

In what ways does J B Priestley present the effect of the Inspectors visit on Arthur Birling in the play? Arthur Birling is a heavy-looking, rather portentous man in his mid-fifties with fairly easy manners but rather provincial in his speeches. At the start of the play Gerald Croft and the Birlings have all had a good dinner, are celebrating a special occasion, and are very pleased with them selves. They are celebrating Sheila and Gerald Crofts engagement. In the beginning Mr Birling is expecting Gerald to adopt his fathers business, meaning that Gerald will be the one giving the economic stability to Sheila when they are married. This proves that Arthur Birling thinks that men should be responsible for the economic affairs of their homes. This character also shows that he only cares about himself when he says: "You'd think everybody has to look after everybody else, as if we were all mixed up together like bees in hive-community and all that nonsense." This tells the audience that Birling doesn't like the idea of people looking out for one and another. In those days in the early 19th century it was normal for the husband to work and the wife to deal with the household and look after the children, this information helps us to understand Arthur's way of thinking because that was what the people lived by and did in his day of life. Arthur Birling doesn't believe in looking after each other, he believes he knows all the answers and that he is superior to others when he declares: "take my word for it, you youngsters and I've learnt in the good hard school of experience that a man has to mind his own business and look after himself and his own." This explains that Arthur Birling is a very ambitious and competitive man, and suggests helping others may slow your process to achieve your objectives, which is not what he expects from a good society. ...read more.

The Inspector is not at all frightened and carries on interrogating Mr Birling. Birling doesn't believe that he has a responsibility to society and the community since he thinks it is: "nonsense." He is the kind of man that: "has to mind his own business and look after himself." This proves to the audience that Arthur is a competitive businessman and his judgement and criticism on society. Mr Birling dislikes the idea of: "everybody has to look after everybody else..." Birling doesn't believe that you need to join as a community to make things happen and improve the society that we live in. He believes that him a: "hard-headed businessman..." just has to look after and rule of his home and business. As the play goes on and as each character tells their piece on how they were in contact with Eva Smith and how they played a part in her caused to death. I would have the characters sitting in a chair around a large dinning table and the Inspector standing as if they were to be in a 'hot seat' in a television game show. I would have Mr Birling sitting at the head of the table and his wife, Sybil on the opposite end. Birling would be wearing a black dinner suit very smart and expensive. Also as each character shares their tale about Eva Smith, other actors would be re-enacting it on the side of the stage to give the audience a real look at what happened to them and Eva. Depending on the scene in the play music would be playing to set the mood for the atmosphere. As each of the characters get spoken to by the Inspector I would have a spot light on them it would change the tones and colour of the lighting opposed to what is happening on stage. For example at the beginning of the play it would have warm, soft colours as the lighting unlike when the apprehension starts to build amongst the family and the Inspector. ...read more.

This creates sympathy, as Arthur Birling was the one that was 'abusing' the working class in the first place so the audience realise that everybody is ganging up on him. All through the little speeches made by the Inspector about the working class, Mr Birling is very quiet and is obviously taking it all in, and maybe secretly taking note in order to mend his ways. The audience will see Birling on stage, very quiet, and again will sympathise with the working class as they see him thinking about it and considering, possibly, how low their quality of life was. I believe: 'Arthur Birling has learned how to build walls to protect him and if another Inspector came then he would probably keep quite and show no emotion. The experience has not made him more caring towards people; he will probably treat his workers in the same way. However, he will probably be cleverer to ensure that nothing like this will happen again. I do not think he has learned anything positive from his experience because he does not have an open mind. He is unwilling to accept the fact that sometimes he is in the wrong and some people do know more than him. He does learn more negative things than positive things but still we can see that he is slightly more open-minded than his wife, Sybil Birling. Arthur Birling is a pompous and self-important man and he is crucial thespian in the play because he represents the upper-middle-class people's attitude towards the working-class people.' The effect of the Inspectors visit on Arthur Birling in the play is the most crucial because even though after some of the most vital and dramatic speeches from the Inspector, Birling still carries on demonstrating himself to be the most high status in society and believes in taking care of his Business, his home and himself. ?? ?? ?? ?? Sandeep Bassi - 10AW ...read more.