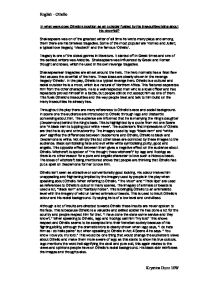 In what ways does Othello's position as an outsider fuelled by his insecurities bring about his downfall?

In what ways does Othello's position as an outsider fuelled by his insecurities bring about his downfall? Shakespeare was on of the greatest writer of all time he wrote many plays and among them there are his timeless tragedies. Some of the most popular are 'Romeo and Juliet', a typical love tragedy, 'Macbeth' and the famous 'Othello'. Tragedy is one of the oldest genres in literature. It started off in Greek times and one of the earliest writers was Aristotle. Shakespeare was influenced by Greek and Roman thought and ideas, which he used in his own revenge tragedies. Shakespearean tragedies are all set around the hero. The hero normally has a fatal flaw that causes the downfall of the hero. These ideas are clearly shown in the revenge tragedy 'Othello'. In the play, Othello is a typical revenge hero. Othello is a cultural and racial outsider he is a moor, which is a natural of Northern Africa. This featured separates him from the other characters. He is a well-respected man who is a loyal officer and has repeatedly proved himself in a battle, but people still do not accept him as one of them. ...read more.

Iago although he appears beautiful the audience see a different view they see more than skin deep. Desdemona accepts Othello for who he is, therefore Othello feels safe and secure with her. He loves and adores Desdemona and would do anything for her. This is clearly shown in Act4 Scene4 "And I when I love thee not, chaos is come again." This is implying that without Desdemona's love it would be the end of the world, the end of Othello. When Iago starts to question Desdemona's love for Othello, Othello now feels he cannot trust Desdemona. This affects him because she makes him feel accepted because she loves him for who he is and now he feels unaccepted into their society. Iago knows this so he plays on these insecurities to get what he wants. I think this quote is a good description telling the audience he is comparing Othello to an Ass, and Iago is leading him with his lies. "And will as tenderly be led by th'nose as asses are." This creates an image of an animal being led away so easily by something so simple, but by something it loves and craves. ...read more.

The "soft" in this sentence is the total opposite of what is thought about Othello. He now discriminated himself and compares him self to other people and this is when he thinks his whole world is crumbling around him especially because his one true love has supposedly betrayed him. If Othello chooses not to believe in himself and lets himself be an outsider from the rest, then what chance does he have expecting others to accept him? Othello's position as an outsider is in a lot of way fuelled by his insecurities. This is a serious weakness that comes across on Othello and the paranoia he has upon himself does not help. Desdemona gave him the confidence to not care, but Iago's twisted and conniving ways led Othello to believe his one true love was not there beside him any more helping him through the tough times. Desdemona fuelled the little confidence Othello had and it was this reason that Iago used to break Othello. In the last scene Othello speaks "Like a base Indian, threw a pearl away." Here in this metaphor Othello has realised Desdemona was his pearl the one thing left that made him she was his world and his world had now gone. English - Othello Krystina Dunn 10W ...read more.