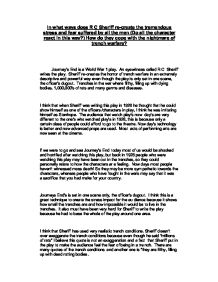 In what ways does R C Sheriff re-create the tremendous stress and fear suffered by all the men (Do all the character react in this way?) How do they cope with the nightmare of trench warfare? Journey's End is a World War 1 play. An eyewitness called R C Sheriff writes the play. Sheriff re-creates the horror of trench warfare in an extremely descriptive and powerful way even though the play is only set in one scene, the officer's dugout. Trenches in the war where filthy, filling up with dying bodies, 1,000,000's of rats and many germs and diseases. I think that when Sheriff was writing this play in 1928 he thought that he could show himself as one of the officers/characters in play, I think he was imitating himself as Stanhope. The audience that watch play's now day's are very different to the one's who watched play's in 1928, this is because only a certain class of people could afford to go to the theatre. ...read more.

It also must have been very hard for Sheriff to write the play because he had to base the whole of the play around one area. I think that Sheriff has used very realistic trench conditions. Sheriff doesn't over exaggerate the trench conditions because even though he said "millions of rats" I believe this quote is not an exaggeration and a fact that Sheriff put in the play to make the audience feel the fear of being in a trench. There are many quotes of the trench conditions and another one is "they are filthy, filling up with dead rotting bodies. To go and watch or read Journey's End you would have to be interested in War to go and watch this play but you would be able to believe the trench conditions because the is loads of evidence to back up these statements. ...read more.

Raleigh is the "new boy" but he knows Stanhope from his private secondary school and has always looked up to him! Raleigh was delighted to be put in Stanhope's section and says, "I can see how my youth hero is". Hibbert is a really petty arguer and he will get hooked up on the smallest thing and will argue over it. He is very disrespectful towards women and is also very sexist towards them. Hibbert tries to get sent home by pretending to be ill, but Stanhope and Hibbert have a big row over Hibbert trying to fake an illness and Stanhope even threatens to shoot him with a gun. Trotter is a unusually positive character and cheerful solider on the outside but is a very scared of dying and losing his life to war. He smokes and drinks a lot to cover up pain and fear. By: Chris Loughead 9s ...read more.