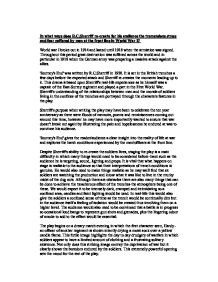 In what ways does R.C.Sherriff re-create for his audience the tremendous stress and fear suffered by men at the front line

In what ways does R.C.Sherriff re-create for his audience the tremendous stress and fear suffered by men at the front line in World War I? World war I broke out in 1914 and lasted until 1918 when the armistice was signed. Throughout this period great destruction was suffered across the world and in particular in 1918 when the German army was preparing a massive attack against the allies. 'Journey's End' was written by R.C.Sherriff in 1928. It is set in the British trenches a few days before the expected attack and Sherriff re-creates the moments leading up to it. This drama is based upon Sherriff's real-life experiences as he himself was a captain of the East-Surrey regiment and played a part in the First World War. Sherriff's understanding of the relationships between men and the morale of soldiers living in the confines of the trenches are portrayed through the characters features in the play. Sherriff's purpose when writing the play may have been to celebrate the ten year anniversary as there were floods of memoirs, poems and reminiscences coming out around this time, however he may have more importantly wanted to ensure that war doesn't break out again by illustrating the pain and hopelessness he endured at was to convince his audience. 'Journey's End' gives the reader/audience a clear insight into the reality of life at war and explores the harsh conditions experienced by the men/officers at the front line. Despite Sherriff's ability to re-create the soldiers lives, staging the play is a main difficulty in which many things would need to be considered before-hand such as the audience he is targeting, sound, lighting and props. It is vital that what happens on stage is realistic to the audience so that their interpretations of trench conditions is genuine. He would also need to make things realistic as he may well find that ex soldiers are watching the production and know what it was like to live in the murky midst of the dug outs. ...read more.

We immediately recognise his involvement in his work "You never saw the blasted mess those fellows left the trenches in. Dug-outs smell like cess- pits; rusty bombs; damp rifle grenades; it's perfectly foul. Where are the servants?" This proves what we previously heard about him being a responsible, natural leader however he also instantaneously requests a drink. "Damn the soup! Bring some whisky!" although this doesn't suggest he is an alcoholic we can recognise that he delights in a beverage. Throughout the rest of this scene a more destructive side of Stanhope is shown. His initial attitude towards Raleigh is dismissive, "How did you-get here?" "I was told to report to your company, Stanhope." "Oh. I see. Rather a coincidence" he also goes on to yell at Mason, the Officer's cook, over something highly insignificant, missing pepper. "Then I advise you never to leave it to anyone else again-unless you want to rejoin your platoon out there." This implies that Stanhope is very short tempered and also quite bitter because of his reaction to the missed pepper packet. The audience are most likely to be estranged from Stanhope at this point but as the play proceeds a different side to Stanhope emerges. Hibbert, another officer, has now appeared on the stage and is complaining about a pain in his eye, "I don't think I can manage any supper tonight, Stanhope. It's this beastly neuralgia. . .the beastly pain gets worse every day" Stanhope appears the sensitive commander and allows him to turn in for the night, adding a "Cheero" as he descends the tunnel. Despite this, once Hibbert is out of sight Stanhope makes a hypocritical remark to Osborne. "Another little worm trying to wriggle home" We can gather that Stanhope doesn't believe what Hibbert is saying and merely sees it as an excuse to hide his cowardliness. He thus uses words like 'funk', 'worm' and 'swine' to describe him. ...read more.

Sherriff mentions a few vague descriptions about what goes on but ultimately the mention of Raleigh's injury takes centre stage. We understand that he has been hit with a shell in the back so he is brought back into the trenches. This scene produces a profoundly moving impact as Stanhope firstly allows Raleigh to be laid on Osborne's bed whereas previously he didn't want anyone to touch it out of respect for Osborne. There is also a reversal of role as now Stanhope is showing a paternal figure b caring for Raleigh and his injuries "Sure! I'll bring a candle over and get another blanket." The audience can now see that Stanhope is an emotional charged character as we previously believed that he was unconcerned about the fate of the men. The death of Raleigh then provides further emotion to come out in Stanhope and we finally see the admirable and commendable commander Osborne and Raleigh thought he was. At the end of the play I finally realised the brutality of war and gained a sound insight into the lives of soldiers and morale. The ending of the play was very moving as many soldiers died when the trench collapsed including Raleigh however we are still unsure about what happened to Stanhope, Hibbert or trotter. The death of Raleigh's character symbolises the appalling waste of lives during World War 1 but it also has an intense moving effect on the audience. We had warmed to him at the beginning of the play because of his eagerness and excitement however he never realised the full extent of war until the raid. I think that Sherriff's message was to show people the effects of war on soldier's minds. Stanhope's character was a prime example of this as he was psychologically damaged by the effects of war. I also feel that Sherriff had a hidden message of wanting to convey the full scale horror of war, both physically and mentally. A small disagreement between two countries or two opposing sides can result in a massive loss of life. Top of Form ...read more.