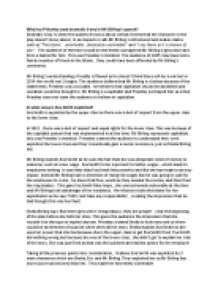 In what ways is Eva Smith exploited? Why has Priestley used dramatic irony in Mr Birlings speech?

Transfer-Encoding: chunked ﻿Why has Priestley used dramatic irony in Mr Birling?s speech? Dramatic irony is when the audience knows about certain events that the character in the play doesn?t know about. In an inspector calls Mr Birling is introduced and makes claims such as ?The titanic?unsinkable , absolutely unsinkable? and ?I say there isn?t a chance of war? . The audience of the time would be extremely outraged at Mr Birling?s ignorance and form a hatred for him . This was Priestley?s intention. The audience of 1945 may have lost a family member of friend in the titanic , they could have been offended by Mr Birling?s comments. Mr Birling?s understanding of reality is flawed as he doesn?t think there will be a war but in 1914 the world war 1 begins. ...read more.

In 1912 , there was a lack of respect and equal rights for the lower class. This was because of the capitalist system that was implemented in at the time. Mr Birling represents capitalism , this was Priestley?s intention. Priestley wanted the audience to understand they were exploited the lower class and they?d eventually gain a social conscience, just as Shelia Birling did. Mr Birling exploits Eva Smith as he uses the fact that she was desperate need of money to make her work at a low wage . Eva Smith forms a protest for better wages , which leads to employees striking. It was likely that Eva Smith felt powerful and like she had made a serious impact. ...read more.

This gives the audience the impression that she wouldn?t be the type to exploit anyone. Priestley wanted Shelia to look innocent so there would be an element of surprise when she told her story. Shelia exploits Eva Smith as she uses her power that she has because she is the upper class to get Eva Smith fired. Eva Smith did nothing wrong but because she was of the lower class , she didn?t get to explain her side of the story. She was just fired as that was the quickest and easiest option for the employer. Taking all the previous points into consideration , I believe Eva Smith was exploited by 3 main characters which are Shelia, Eric and Mr Birling. They exploited her as Mr Birling has more power and money than her.. This made her extremely vulnerable. ...read more.