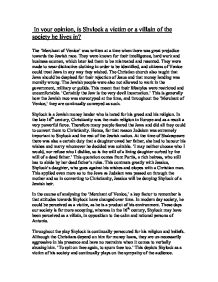 In your opinion, is Shylock a victim or a villain of the society he lives in?

In your opinion, is Shylock a victim or a villain of the society he lives in? The 'Merchant of Venice' was written at a time when there was great prejudice towards the Jewish race. They were known for their intelligence, hard work and business acumen, which later led them to be mistreated and resented. They were made to wear distinctive clothing in order to be identified, and citizens of Venice could treat Jews in any way they wished. The Christian church also taught that Jews should be despised for their rejection of Jesus and that money lending was morally wrong. The Jewish people were also not allowed to work in the government, military or guilds. This meant that their lifestyles were restricted and uncomfortable. 'Certainly the Jew is the very devil incarnation.' This is generally how the Jewish race was stereotyped at the time, and throughout the 'Merchant of Venice,' they are continually conveyed as such. Shylock is a Jewish money lender who is hated for his greed and his religion. In the late 16th century, Christianity was the main religion in Europe and as a result a very powerful force. Therefore many people feared the Jews and did all they could to convert them to Christianity. Hence, for that reason Judaism was extremely important to Shylock and the rest of the Jewish nation. At the time of Shakespeare there was also a certain duty that a daughter owed her father, she had to honour his wishes and marry whomever he decided was suitable. ...read more.

'I had it of Leah when I was a bachelor. I would not have given it for a wilderness of monkeys.' Shakespeare conveys Shylock's reaction, illustrating that he is capable of feelings beyond the emotions of loosing his money. The elopement of Jessica is a major turning point in the development of Shylock's character. When Salerio and Solanio, two of the less important nobles in the play, talk about this, they provide an example of how the Venetian society views Shylock. They refer to him as "The villain Jew" and their hatred of him means he can be seen as a victimized character. This therefore creates sympathy for Shylock because he is very religious and he clings to his faith and money for support. A Shakespearean audience would, most probably, have laughed at Shylock's misfortune, as the play is meant to portray him as a comic character. This means that although we feel compassion towards Shylock, the audience should also understand that it is not a tragic play. In act 3 Scene 1, Shakespeare illustrates Shylock's desire for equality and evokes sympathy from the audience by depicting him as a victim. 'Hath a Jew not eyes? Hath not a Jew hands......fed by the same food, hurt by the same weapons.' Shakespeare uses repetition to enforce the idea that both the Jew and the Christian are made up of the same organs and that in being prejudiced towards the Jewish nation, the Christians are mocking their own lifestyles as well. ...read more.

He could be seen as a bloodthirsty fiend who cares more for his money than his runaway daughter and is given several chances to beg for mercy. For example; In Act 1 Scene 3 Shylock decides that he will lend money to Antonio on the condition that if it is not re-paid within the three months then a pound of flesh will be taken from Antonio's body. 'A pound of man's flesh taken from a man.' This portrays Shylock a man who is intent on taking revenge on the Christians. It also illustrates his villainous character as he hopes that Antonio's merchant ships will not return. Later on in the play Shylock finds out that the vessels have sunk and he becomes filled with excitement at the prospect of carrying out the bond. 'Good news, good news. Ha ha! Heard in Genoa!' Shakespeare shows that although there is great prejudice towards the Jews, Shylock is cold hearted and in a sense acts in the same way as the Christians he despises. After Shylock finds out about the disappearance of his daughter along with his precious jewels and riches his priorities are soon brought to light. 'O my ducats! O my daughter!' Although this is only Solanio's account, and could be the contortion of the truth, Shylock later mentions his hatred for his daughter as he wishes she were dead. 'I would my daughter were dead at my foot, and the jewels in her ear; would she were hearsed at my foot and the ducats in her coffin.' Shakespeare illustrates that although they are related, Shylock has no intention of forgiving her and would rather she were dead with her crime placed upon her. ...read more.