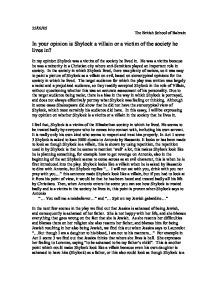 In your opinion is Shylock a villain or a victim of the society he lives in?

25/02/05 The British School of Bahrain In your opinion is Shylock a villain or a victim of the society he lives in? In my opinion Shylock was a victim of the society he lived in. He was a victim because he was a minority in a Christian city where anti-Semitism played an important role in society. In the society in which Shylock lived, there was plenty of racism, so it was easy to paint a picture of Shylock as a villain on evil, based on stereotypical opinions for the society in which he lived. The target audience for which the play was written was largely a racist and a prejudiced audience, so they readily accepted Shylock in the role of Villain, without questioning whether this was an accurate assessment of his personality. Due to the target audience being racist, there is a bias in the way in which Shylock is portrayed, and does not always effectively portray what Shylock was feeling or thinking. Although in some cases Shakespeare did show that he did not have the stereotypical view of Shylock, which most certainly his audience did have. In this essay, I will be expressing my opinion on whether Shylock is a victim or a villain in the society that he lives in. ...read more.

She would accept the family's religion as an important part of her heritage and background, and not something to be ashamed of. In Act 2 scene 5 Shylock looks like a kill joy - he seems to give Jessica no freedom and is always controlling her, and not leaving her on her own. This could be because he is in fear of what might happen to her, and thus his controlling her is just Shylock's way of making sure that nothing happens to her, as he wants her to be protected. However because Shylock is portrayed in such a negative way, his control over Jessica could be incorrectly seen as unreasonable and evil - so one again he looks like a villain. In this scene there are very good examples which shows how much hatred Shylock has towards Christians for example "But yet I'll go in hate, to feed upon the prodigal Christian". In this scene there is dramatic irony, this is when the audience know what is happening and some of the characters do not know what is happening. The use of dramatic irony is used when, Shylock explains his dreams, and he says that he is going to lose something. ...read more.

This is also ironic, as when Shylock had the upper hand against his enemies they all begged him for mercy, and told him that what he is doing is wrong, but when the tables had turned against Shylock and he was now the victim, and the Christian society had the upper hand, they did not show that they were better than him and give him mercy, as they had begged him for. This all shows that in the end Shylock was the Victim, and that the society he lived in was the villain towards him, and other Jews. So to summarize in my opinion I believe that shylock was a victim and a villain of the society he lived in, he was a victim due to the fact that he was a minority amongst Christians, and during his time there was a lot of racism against him and his religion, I also believe that Shylock was a villain in some ways because the society had driven him to be villainess meaning that because he was treated so badly, that every time he could get his own revenge back against the Christians he did try to do that, making it look like he is the villain to a Shakespearean audience. 1,648 words Done by Cameron Hill ...read more.