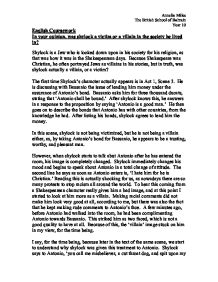 In your opinion, was shylock a victim or a villain in the society he lived in?

English Coursework In your opinion, was shylock a victim or a villain in the society he lived in? Shylock is a Jew who is looked down upon in his society for his religion, as that was how it was in the Shakespearean days. Because Shakespeare was Christian, he often portrayed Jews as villains in his stories, but in truth, was shylock actually a villain, or a victim? The first time Shylock's character actually appears is in Act 1, Scene 3. He is discussing with Bassanio the issue of lending him money under the assurance of Antonio's bond. Bassanio asks him for three thousand ducats, stating that 'Antonio shall be bound.' After shylock knows this, he answers in a response to the proposition by saying 'Antonio is a good man.' He then goes on to describe the bonds that Antonio has with other countries, from the knowledge he had. After listing his bonds, shylock agrees to lend him the money. In this scene, shylock is not being victimized, but he is not being a villain either, as, by taking Antonio's bond for Bassanio, he appears to be a trusting, worthy, and pleasant man. ...read more.

I sympathized with shylock for this, and he was once again portrayed as a victim. In Act 2 Scene 5, shylock is with Jessica, his daughter. His tone in which he speaks to his daughter seems fine, but again, he is putting Christians down by calling them 'Christian fools.' By now I know most of his reasons for hating Christians, so to me he was still a victim, but some of the things he did were unreasonable, for example, I think Jessica should have been able to create her own opinion about Christians, instead of having her father try to drill these racial comments into her head. However, although he tries to make Jessica think like he does, dramatic irony is used in the beginning of scene 3. Shylock knows nothing of this, but the audience has learnt from a conversation between Jessica and Launcelot that she is planning to elope with him. Bu knowing this information, we realize that Jessica obviously does not have an open relationship with her father, as she hides big secrets from him. ...read more.

In Act 3 scene 3, Shylock appears with Antonio and Solanio, and he is arguing that he did not get his bond. Here I start to feel sorry for him, as the bond was a promise, and shylock also keeps talking about how Antonio hates him, which also makes me sympathize. This, once again, made him seem a victim, but this time I stuck with thinking he was a villain, as, when I looked back overall, he seemed a bigger villain than a victim. Referring back to the question, one thing I had to keep in mind was the opinions of both audiences, nowadays, and the audience in the actual Shakespearean times. The main point I made in this essay was the racism, as that is an issue that has changed quite a lot over the years. As opposed to today, people back then thought nothing of racism, so to them shylock would continue being a victim whatever he did. But nowadays people are more sympathetic towards victims of racism, so shylock is less of a victim. However, after the examples I have read over, I still see him as a victim. ?? ?? ?? ?? Annelie Miles The British School of Bahrain Year 10 ...read more.