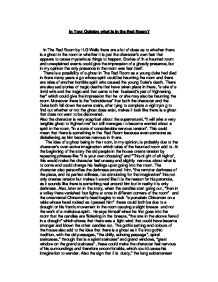 In Your Opinion what is in the Red Room?

In Your Opinion what is in the Red Room? In The Red Room by H.G Wells there are a lot of clues as to whether there is a ghost in the room or whether it is just the character's own fear that appears to cause mysterious things to happen. Stories of the haunted room and unexplained events could give the impression of a ghostly presence, but in my opinion the only presence in the room was fear itself. There is a possibility of a ghost in The Red Room as a young duke had died in there many years a go whose spirit could be haunting the room and there are tales of another horrible spirit who caused the young Duke's death. There are also sad stories of tragic deaths that have taken place in there, "a tale of a timid wife and the tragic end that came to her husband's jest of frightening her" which could give the impression that he or she may also be haunting the room. ...read more.

room" and the ornamental Chinaman's head begins to rock "a porcelain Chinaman on a table whose head rocked as I passed him" these could both be due to a draught or his frantic movement in the room causing a slight breeze and not the work of a malicious spirit. He says himself when he first goes into the room that the candles are flickering in the breeze, "the one in the alcove flared in a draught" which shows that there was a light wind that could have became stronger and blown the other candles out. The gothic setting and colours of the house also add to the idea that there is a ghost as it fits into gothic tradition, with the old passages, "the chilly, echoing passage", spiral staircases," through that is a spiral staircase" and grand windows, "great window on the grand staircase", these could make the character feel nervous of his surroundings and therefore uncomfortable, which could cause his imagination to wander. ...read more.

Finally the character says at the end of the story that it is his fear that made the Red room intimidating and not a ghost, "there is no ghost there at all; but worse far worse... Fear..." so this proves that there is no ghost. To conclude I think that there are some compelling descriptions and tales of a supernatural presence in the room that could mean that the Red Room is haunted because of the deaths that have taken place in there and the fact that neither the character or the young duke could complete a vigil in the room could be due to a supernatural being. However in my opinion there are rational explanations for all the "mysterious" happenings and as there is no sign of a tangible ghost, or anything else for that matter, I agree with the characters own conclusion at the end of the story, that there is nothing in the room and it was just his own fear that frightened him out of staying there. ...read more.