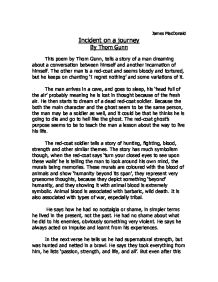 Incident on a journey By Thom Gunn

James MacDonald Incident on a journey By Thom Gunn This poem by Thom Gunn, tells a story of a man dreaming about a conversation between himself and another incarnation of himself. The other man is a red-coat and seems bloody and tortured, but he keeps on chanting 'I regret nothing' and some variations of it. The man arrives in a cave, and goes to sleep, his 'head full of the air' probably meaning he is lost in thought because of the fresh air. He then starts to dream of a dead red-coat soldier. Because the both the main character and the ghost seem to be the same person, the man may be a soldier as well, and it could be that he thinks he is going to die and go to hell like the ghost. ...read more.

These murals are coloured with the blood of animals and show 'humanity beyond its span', they represent very gruesome thoughts, because they depict something 'beyond' humanity, and they showing it with animal blood is extremely symbolic. Animal blood is associated with barbaric, wild death. It is also associated with types of war, especially tribal. He says how he had no nostalgia or shame, in simpler terms he lived in the present, not the past. He had no shame about what he did to his enemies, obviously something very violent. He says he always acted on impulse and learnt from his experiences. In the next verse he tells us he had supernatural strength, but was hunted and netted in a brawl. ...read more.

The next verse is still about his rise after his defeat. He is weak and unsatisfied. He tells the man of his death, as an animal. In the last verse the dreaming man wakes up, alive and feeling strong. His feelings are the opposite of the beaten red-coat. He feels invigorated. He takes away the lesson the red-coat was telling him, to regret nothing, and he says 'I would regret nothing' himself. This story is a good one because it is so dramatic and emotive. The main character lives a life of fighting and acting on impulse, and always living in the present. This story's purpose was mainly to teach the lesson of not regretting the past, because it can't be changed or re-lived. ...read more.