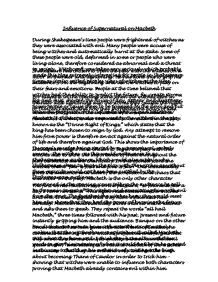 Influence of the Supernatural on Macbeth.

Influence of Supernatural on Macbeth During Shakespeare's time people were frightened of witches as they were associated with evil. Many people were accuse of being witches and automatically burnt at the stake. Some of these people were old, deformed in some or people who were living alone, therefore considered as abnormal and a threat to society. Witchcraft was taken very seriously which probably made this play extremely interesting for people in Shakespeare times as it also settled peoples views of witches at the time. Shakespeare has chosen to open the play with the witches on a moor in thunder and lightening. He has done this to grip his audience from the beginning and use the witches to play on their fears and emotions. People at the time believed that witches had the ability to predict the future, fly, create storms, fog and mist, shorten the hours of day, appear and disappear, posses people or cause them to be possessed by the devil and put curses on people which could make them ill and kill them. Almost all of these powers were used by the witches in the play. For example in the opening scene when the witches were in thunder and lightening also the storms they caused the night of Duncen's death and how they shortened the hours of day. ...read more.

Once Macbeth has been given the title Thane of Cawdor, he continues believing in the witches prophecies and forgets that they are evil, whereas Banquo questions them "can the devil speak truth?," and attempts to remind Macbeth of the witches main aims - that they are evil and only told him the truth about becoming Thane of Cawdor in order to trick him - showing that witches were unable to influence both characters proving that Macbeth already contains evil within him. Macbeth then makes a very important speech to the audience (soliloquy) which is vital in order to keep the audience informed about what Macbeth's thoughts are. "This supernatural soliciting cannot be ill; cannot be good:" the opening lines of Macbeth's soliloquy suggest that he is already confused about evil and good. "And make my seated heart knock at my ribs against the use of nature." This shows that he already considering doing evil (something unnatural) i.e. the murder of Duncan. This line also shows that Macbeth is aware of the fact evil is greatly involved in his plans which is why they have disturbed his body so greatly. As, evil is considered to be unnatural and Macbeth decides to take the throne unnaturally, shows us that Macbeth has repressed his own nature (peace of mind, a healthy appetite and deep refreshing sleep), rejected goodness and gone ahead with the murder. ...read more.

However, his ambition of wanting to become king was more important to him, and is what caused him to murder Duncan. This could suggest that his ambition was what caused him to murder Duncan and not just the supernatural. Also, due to the imagery used in this soliloquy which shows that he has consciously chosen to reject goodness and embrace evil, for example, "come, let me clutch thee," when talking about the dagger and, "Thou sure and firm -set earth," when talking about the act of murder itself. Throughout the play the witches only appear three times, yet they are the basis of the entire play and their presence is always there. Whether it is shown through the characters (for example Lady Macbeth going mad and eventually committing suicide) or the settings/scenery (for example storms). However, I think towards the end of the play - the continuos murders that Macbeth commits are not directly linked to the supernatural (or the witches) as he seems to have become "naturally" evil and no longer need the help of the witches. For example he says, "be it thought and done," instead being confused and thinking about the consequences of his evil thoughts. However, finally in Act 5 Scene 6 Macbeth begins to question the witches. Unfortunately it is too late. This shows the strength of the influence the witches had on Macbeth as they kept him under their spell till the last moment ...read more.