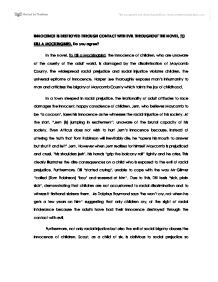 Innocence is destroyed through contact with evil throughout To Kill a Mockingbird. Do you agree?

INNOCENCE IS DESTROYED THROUGH CONTACT WITH EVIL THROUGHOUT THE NOVEL, TO KILL A MOCKINGBIRD. Do you agree? In the novel, To Kill a Mockingbird, the innocence of children, who are unaware of the cruelty of the adult world, is damaged by the discrimination of Maycomb County. The widespread racial prejudice and social injustice violates children, the universal epitome of innocence. Harper Lee thoroughly exposes man's inhumanity to man and criticises the bigotry of Maycomb County which taints the joy of childhood. In a town steeped in racial prejudice, the irrationality of adult attitudes to race damages the innocent, happy conscience of children. Jem, who believes Maycomb to be "a cocoon", loses his innocence as he witnesses the racial injustice of his society. At the start, "Jem [is] jumping in excitement", unaware of the brutal capacity of his society. ...read more.

Furthermore, not only racial injustice but also the evil of social bigotry abuses the innocence of children. Scout, as a child of six, is oblivious to social prejudice so unknowingly accepts it. After realising that Boo Radley, who is believed to be a "malevolent phantom", is actually a man who has given them "two soap dolls, a broken watch and chain, a pair of good-luck pennies, and [their] lives", Scout learns to see the true self of individuals. Her understanding of society demonstrates that associating with evil has the potential to destroy innocence. In addition, Aunt Alexandra's refusal to allow Scout to associate with Walter Cunningham open's Scout eyes to the prevalent social class system of Maycomb County: "our kind of folks don't like the Cunninghams, the Cunninghams don't like the Ewells, and the Ewells hate and despise the coloured folks." ...read more.

Her father forces her to be the family slave and due to her lack of education she's unable to escape from this harsh reality. Even Burris Ewell, who calls Miss Caroline a "snot-nosed slut of a school teacher", is robbed of a joyful childhood, as he has a father, who is a man who cares very little for anyone but himself. The circumstances over which the children have no control, and mankind's malice and instinct to hurt, has destroyed the innocence of many children in To Kill a Mockingbird. Thus, the social injustice, the widespread racial prejudice and man's inhumanity to man are all represented by Harper Lee as evil which destroys innocence. Whilst the cruelty in Maycomb County teaches Jem, Scout and Dill moral lessons which vandalize their childhood, the Ewells' children are totally deprived of a carefree childhood at all. Thus, evil, in many forms, shatters innocence throughout To Kill a Mockingbird. ...read more.