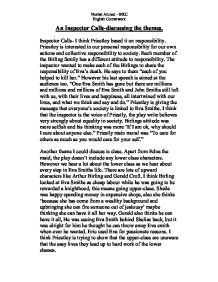 An Inspector Calls-discussing the themes. Inspector Calls- I think Priestley based it on responsibility. Priestley is interested in our personal responsibility for our own actions and collective responsibility to society. Each member of the Birling family has a different attitude to responsibility. The inspector wanted to make each of the Birlings to share the responsibility of Eva's death. He says to them "each of you helped to kill her." However his last speech is aimed at the audience too. "One Eva Smith has gone but there are millions and millions and millions of Eva Smith and John Smiths still left with us, with their lives and happiness, all intertwined with our lives, and what we think and say and do." Priestley is giving the message that everyone's society is linked to Eva Smiths. I think that the inspector is the voice of Priestly, the play write believes very strongly about equality in society. Birlings attitude was more selfish and his thinking was more 'If I am ok, why should I care about anyone else." ...read more.

Eric used Eva for passionate reasons. I think Priestley is trying to show that the upper-class are unaware that the easy lives they lead up to hard work of the lower classes. An important theme is young and old. In the play the older characters and the younger characters take the Inspectors message in different ways. Sheila and Eric are able to admit to their part of Eva Smiths death and feel guilty about it. On the other hand their parents do not want to admit they did anything wrong. Birling and Mrs Birling are set in their ways. They think they are always right and see the young as foolish. But actually Priestley tried to show the young are open to new ideas. Mrs Birling lies to the inspector when he shows her a photograph of Eva Smith, but the young are honest and admit to their faults. To prove this Eric says, "The fact remains that I did what I did." ...read more.

There are small hints that 'not all is as it seems' for example earlier on we wonder whether the happy atmosphere is forced there is a lot of tension in the room. This is what gives the audience more interest and the pay more attention. The audience want to know what is going on! The last theme is dramatic irony, for example, the audience know Mr Birling is wrong when he says "the Titanic she sets sails next week, fourty six thousand eight hundred tons, new York in five days and every luxury and unsinkable. We know that the Titanic sunk; this puts the audience over the characters and makes them more involved. In the end Priestley leaves the audience on a cliffhanger. In Act 3 the family discovers that the inspector is fake and no girl died in the infirmary. This releases some of the tension, however the final telephone call is announcing that a real inspector is coming to visit them to ask question about a girl who committed suicide. It is an unexpected final twist. Nuzhat Ahmed -10KC English Coursework ...read more.