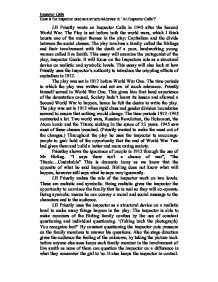 J.B Priestly wrote an Inspector Calls in 1945 after the Second World War. The Play is set before both the world wars, which I think boosts one of the major themes in the play; Capitalism and the divide between the social classes. The play involves a family called the Birlings and their involvement with the death of a poor, hardworking young woman called Eva Smith. This essay will examine the protagonist of the play, inspector Goole. It will focus on the Inspectors role as a structural device on realistic and symbolic levels. This essay will also look at how Priestly uses the Inspector's authority to introduce the crippling effects of capitalism in 1912. The play was set in 1912 before World War One. The time periods in which the play was written and set are of much relevance. Priestly himself served in World War One. This gives him first hand experience of the devastation caused, Society hadn't learnt its lesson and allowed a Second World War to happen, hence he felt the desire to write the play. The play was set in 1912 when rigid class and gender division boundaries seemed to ensure that nothing would change. The time periods 1912-1945 contrasted a lot. ...read more.

"In fire, blood and anguish" is a resemblance of heel and he is saying if people do not learn then they will in hell. 'We are members of one body' This quote shows that everyone must look after one and other, and think about what they are about to do as we are all alike. We are all members of God is the message. The "we" refers to the family, who were all involved in Eva's death. J.B Priestly is clever in the way that he is able to create mystery about who or what the inspector is. The Inspector knows so much about the family without ever meeting them. Gerald 'There isn't any such inspector'. When Gerald comes back to report that there is no such inspector who goes by the name Inspector Goole it creates mystery behind who he is and how he knew all the information he did. After the family expresses their relief, a call from the police shocks them and creates even more mystery. A police Inspector reports 'that was the police- a girl has just died-on her way to the infirmary - after swallowing some disinfectant.' This is a huge twist and questions everyone's mind into how the inspector was able to predict the future, is he a time traveller or alien? ...read more.

He also used dramatic devices such as stage directions to help enforce our ideas about the inspector. The Inspector is a bold and powerful man and Priestley is able to get his moral message across because of this. The final speech made by the inspector is strong and emotional and this is how the message is put across well. Priestley is still able to put his message across today. His play has been made to work in three different time periods; 1912, 1945 and the present day. The play "An Inspector Calls" has been made to work in three time periods; 1912 1945 and to the present day. 1912 was when it was set, this was when capitalism was big and the world was advancing. There was a huge social divide and Priestley's message tells us to think about what we do and how our actions affect each other. Things have changed since 1912, however capitalism drives the modern economy, which is fuelled by greedy businessmen. There is still a social divide however people try not to see it, as they feel better off without it. The play is able to get Priestley's message across in all the time periods because of this. The play is used as the voice of Priestley's message. Inspector Calls How is the inspector used as a structural device in 'An Inspector Calls'? ...read more.