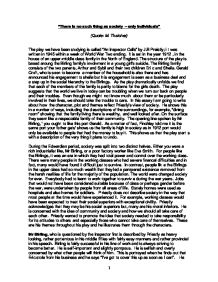 "There is no such thing as society - only individuals" (Quote: M. Thatcher) The play we have been studying is called "An Inspector Calls" by J.B Preistly; it was written in 1945 within a week of World War Two ending. It is set in the year 1912, in the house of an upper-middle class family in the North of England. The structure of the play is based aroung the Birling family's involvment in a young girl's suicide. The Birling family consists of the two parents, Arthur and Sybil and their two children Eric and Sheila. Gerald Croft, who is soon to become a member of the household is also there and has announced his engagement to sheila but his engagement is seen as a business deal and a step up in the social hierarchy to the Birlings. As the play dramatically unfolds we find that each of the members of the family is partly to blame for the girls death. The play suggests that the world we live in today can be troubling when we turn our back on people and their troubles. Even though we might not know much about them or be particularly involved in their lives, we should take the trouble to care. In this essay I am going to write about how the character, plot and themes reflect Priestly's view of society. ...read more.

She is in her early twenties and has just become engaged to Gerald Croft. Sheila like her father uses dramatic irony when she says that she'll "never let it out of my sight" when talking about the ring. Sheila is the most sensible out of the family and is quite perceptive. She works out before everyone else that you can't hide anything from the inspector and tries to stop her parents from making a fool of them selves but they don't listen to her, this is shown when she says to them " he's giving us the rope - so that we'll hang ourselves". After finding out about Eva's death she shows guilt and responsibility for her actions and is then determined to adjust her way of life. She shows this when she says " I felt rotten about it at the time and now I feel a lot worse." Sheila was responsible for the sacking of Eva Smith from her job in Milwards; she had Eva sacked as she thought Eva had mocked her. Sheila symbolises that in the society of the time, people from each class stuck together and worked together. She is also symbolic of a younger generation that may learn from its mistakes. By the end of the play Priestly shows that the younger generation are capable of learning from their mistakes and of changing when Sheila says to Gerald " You and I aren't the same people who sat down to dinner here". ...read more.

Inspector Goole reinforces this when he says 'One Eva Smith has gone but there are millions and millions and millions of Eva smiths and John Smiths still left with us...'There is a great effect of never meeting Eva, which results in us only seeing her through the eyes of the other characters. This means that we are unable to form our own judgements about her, she emerges as a more principled character than the others. We never actually find out who Inspector Goole is. It may be that Priestly intended him to represent peoples own morals and consciences. After reading this play it reminded me that I need to take my own part in responsibility for my actions and for helping others. It showed me that we cannot live our lives selfishly wrapped up in our own thoughts without considering the impact of our actions on those around us. We have a collective responsibility for ensuring that those who are weak or disadvantaged in some way are not left out and that they are cared for. The world we live in today has increasing crime and death reported in the news on a daily basis. This shows that many people in our society do not care about other peoples' beliefs, cultures, feelings and way of life. Difference is not a bad thing and we should respect others and try to understand their viewpoints. 1 ...read more.