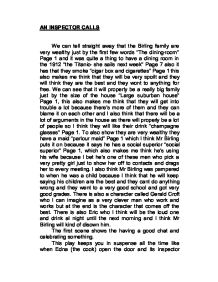 AN INSPECTOR CALLS We can tell straight away that the Birling family are very wealthy just by the first few words "The dining-room" Page 1 and it was quite a thing to have a dining room in the 1912 "the Titanic- she sails next week" Page 7 also it has that they smoke "cigar box and cigarettes" Page 1 this also makes me think that they will be very spoilt and they will think they are the best and they wont to anything for free. We can see that it will properly be a really big family just by the size of the house "Large suburban house" Page 1, this also makes me think that they will get into trouble a lot because there's more of them and they can blame it on each other and I also think that there will be a lot of arguments in the house as there will properly be a lot of people so I think they will like their drink "champagne glasses" Page 1. To also show they are very wealthy they have a maid "parlour maid" Page 1 which I think Mr Birling puts it on because it says he has a social superior "social superior" Page 1, which also makes me think he's using his wife because I bet he's one of these men who pick a very pretty girl just to show her off to contacts and drags her to every meeting. ...read more.

He is very mysterious "yes, Sir. Only recently transferred" Page 11. He was also very manipulative by the way his says his words "I think you remember Eva Smith now, don't you, Mr Birling" Page 13 so the inspector is trying to make Mr Birling say what he wants him to say so he can get better information. He has been brought up well because he is very formal "Thank you, Sir" which shows us more that he is an inspector because they are told to be polite and nice to the public. He is also very confident like he just walks straight in, and he asks questions directly so really he's rude. Also he is very serious and very direct "ok that's all I want to know from you" Page 39. So the Inspector is some ways shy but in other ways really confident. Now Gerald is a very clever man and does do many things wrong but he is still a good man. He is very devious "I was awfully busy at the works all the time" Page 3 but we know that he wasn't we know he was with her, that Eva Smith. He was also very complacent "I didn't feel as much about her as she did me" Page 38 which shows us he thinks he can pick and choose people so he thinks he's the best again. ...read more.

Also he's so devious by the way he knits his way around his family and it's as if he has everybody in the palm of his hand. So it's very clever the way they have done that. Another one of my favourite quotes was when Mr Birling says about the "drawing room" page 2 because he always has to use big intelligent words to make himself look big when everybody is equal. He even brags in front of his own which there is no reason for because they know what he's like and how much money he's got and even if he does have a lot of money what's the big deal. There family might I have money but are they happy? NO. Also did he get his money fairly, did he have to work hard for it? NO. My third favourite quote is when the inspector says "G double o-l-e" Page 16 that's really does make me laugh because he's trying to be cool and also that makes himself sound very confident and he is a very clever man by the way he is manipulative and gets the information out of them in the end. I think that that quote is to make himself seem laid back so they will be laid back and will tell him more because they will think its not to serious, then when they get into meeting him more he will become very formal "no thank you Mr Birling, I'm on duty" Page 11 ...read more.