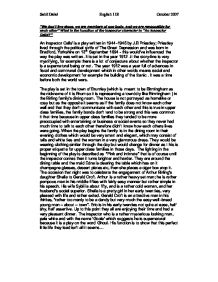 "We don't live alone, we are members of one body, and we are responsible for each other" What is the function of the inspector character in "An Inspector Calls?"' An Inspector Calls' is a play written in 1944-1945 by J.B Priestley; Priestley lived through the political strife of The Great Depression and was born in Bradford, Yorkshire on 13th September 1894 - this would've influenced the way the play was written. It is set in the year 1912 .it the story-line is very mystifying, for example there is a lot of conjecture about whether the inspector is a supernatural being or not. The year 1912 was a year full of advances in fiscal and communal development which in other words means social and economic development for example the building of the titanic. It was a time before both the world wars. The play is set in the town of Brumley (which is meant to be Birmingham as the nickname of it is Brum so it is representing a town/city like Birmingham) in the Birling family's dining room. The house is not portrayed as homelike or cosy but as the opposite it seems as if the family does not know each other well and that they don't communicate with each other and this is true in upper class families, the family bonds don't tend to be strong and this was common it that time because in upper class families they tended to be more preoccupied with entertaining or business or social events so they never had much time to talk to each other therefore didn't know how each others lives were going. ...read more.

Eric had a relationship with her but it ended and she became pregnant and she asked money from Mrs. Birling but she refused as Eva was using the Birling name as her own which insulted Sybil. They also have different opinions about the situation and they each react differently after, some change and others go on as if nothing has happened. Arthur is used to represent selfishness and heartlessness he shows this when he says "if you don't come down sharply on some of these people, they'd soon be asking for the earth". When he finds out about Eva for the first time he isn't bothered and doesn't regret his decision on sacking Eva he still sees it from an employer's point of view and does not show no emotion or sympathy. But when the inspector finds out about things that the whole family has done he is wishing this never happened, and when he finds out that the inspector really isn't an inspector he goes back to normal again as if it never happened this shows he is a cold and selfish person and the inspector really magnifies this. Sybil is also a very cold hearted and feels as if she is superior to everyone else; this is due to her coming from a rich and high class family. When she finds out about this girl she shows no emotion and isn't sympathetic in what she says "but I think she has herself to blame". She is so heartless and when the inspector asks her about when Eva came to ask for money when she was pregnant she declined her because of two reasons; one would be she used the Birling name this outraged Sybil and made her decline her. ...read more.

Good night." This is showing this by using common names for example John Smith to show that this is everyday life and we need to be responsible for each other because everything that happens may affect us. The function of the inspector is to show what he said above is true and proves it, because everyone contributed to her death, and he is making them aware that they should look after each other and learn from this mistake. I think that Priestley is trying to send a message through the inspector's character he is trying to put the message that in society this is common; people don't account for each other, we don't think that by us doing one thing it may lead to someone else getting affected and that in life we are responsible for each other. The inspector got through to everyone except Mr and Mrs. Birling they are too proud to admit they are wrong and are hard headed. When he ended with the phone call about a girl dying he is giving out the feeling that they have been let off and they now should recognise to do things differently from now on, the inspector was trying put a message through, I think especially to Mr. Birling as the inspector said before he left the exact opposite to Arthur's philosophy on life. I think that the ultimate function of the inspector is to change Arthur's ways and to show the rest of the family to be aware and make sure that they care for everyone as everyone is responsible for each other and that by sticking together we are stronger. ?? ?? ?? ?? Sahil Dalal English 11E October 2007 ...read more.