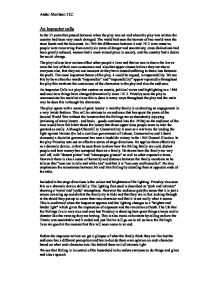 An Inspector calls In the 33 years that passed between when the play was set and when the play was written the country had been very much changed. The world had seen the horrors of two world wars the atom bomb and the holocaust. In 1945 the differences between it and 1912 were massive, people were recovering from nearly six years of danger and uncertainty, class distinctions had been greatly reduced, women had a more valued place in society, and the country had a desire for social change. The play tells us how actions affect other people's lives and that no one is above the law or even the law of their own conscience and also that upper classes believe they are above everyone else, that they are not innocent as they have caused suffering to those less fortunate for profit. The most important theme of the play, it could be argued, is responsibility. We see this by how often the words "responsible" and "responsibility" appear repeatedly throughout the play this awakens the conscience of the characters in the play and also the audience An Inspector Calls is a play that centres on morals, political views and highlighting to a 1946 audience how things have changed dramatically since 1912. Priestley uses the play to communicate his socialist views this is done is many ways throughout the play and the main way he does this is though his characters. The play opens with a scene of great luxury: a wealthy family is celebrating an engagement in a very lavish fashion. This will be obvious to an audience that has spent the years of the Second World War without the luxuries that the Birlings are so abundantly enjoying (rationing of many luxury - and basic - goods continued into the 1950s) so the audience of the time would have felt bitter about the luxury that these upper class people seem to take for granted so easily. ...read more.

She later returns guiltily, "You knew it was me all along didn't you?" Immediately her character is shown to be sympathetic, insignificant and shy because of this guilt. Sheila goes on to explain how she was entirely responsible for Eva Smith loosing her job at Milliards, "I went to the manager at Milwards and I told him that if they didn't get rid of that girl Id never go near the place again and Id persuade mother to close our account with them." This shows that Sheila, like her father, abused her position as a wealthy member of the community. Sheila feels great guilt for the actions that she committed; she agrees with the Inspector when he says, "You used the power you had to punish the girl." Unlike her father, Sheila is full of sorrow and remorse for what she did, the inspector supports her when saying, "and She feels responsible". Sheila does say that I know I'm to blame and I'm desperately sorry.� Sheila is also the first to figure out that the inspector has a type of power, when Mrs Birling is arguing with him, Sheila warns her, "You mustn't try to build up a kind of wall The inspector will just break it down." And it'll be all the worse when he does. J.R priestly uses this a lot through the novel. Sheilas character is totally unlike that of her fathers, where she accepts responsibility, Arthur Birling completely refuses to accept. It is obvious from what Sheila says that she believes she is entirely to blame and feels great guilt, for which she will be forever affected. It is also clear that her character and views have been changed by the current event and the impact of the inspect. Gerald Croft, the only person who is not a direct relation to the Birling family, but is engaged to Sheila, also has an involvement with the death of Eva Smith. ...read more.

The fact that the play was written in the midst of the Second World War suggests that Priestly was saying that the lessons of what happened in the First World War had not been learned. In using these time frames Priestley could create dramatic irony as the audience would know about events that the characters on stage wouldn't. This is just one example of the devices he uses explore responsibility. Once the inspector has left his message doesn't seem to have had an effect on Birling for a while and he seems worried but that soon changes once Gerald enters and reveals that Inspector Goole was not a police officer. Birling suddenly jumps into action and talks of how it was a hoax "By Jingo! A Fake!" While Birling is thinking about what to do next he does not realize that he has lost both of his children. Sheila at this point brakes away from what has been expected of her and begins to tell her parents how there reactions are wrong she now becomes the representative of socialism since the inspector has left "you're just beginning to pretend all over again". This is one of the major messages of the play, which the younger generation learn from the events and change for the better by this happening priestly shows that his 1946 audience that they should not cling to the past but also change and try and lead a more socialist life. He has taught the audience that responsibility for ones actions is a key role in life, for though not one person is solely to blame for Eva's death they're still involved in her drastic actions to take her own life. His meaning: just because you are not all together to blame doesn't mean you are not to be blamed at all. And so Priestley has successfully conveyed his personal opinions of socialism and capitalism. By reading and watching the play "An Inspector Calls" we are able to understand the differences between denial and morals, those of which Priestley believed in. ?? ?? ?? ?? Aidan Morrison 11C ...read more.