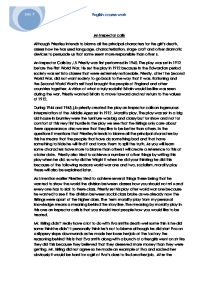 An inspector calls Although Priestley intends to blame all the principal characters for the girl's death, assess how he has used language, characterization, stage craft and other dramatic devices to persuade us that some seem more responsible than others. An Inspector Calls by J.B Priestly was first performed in 1945. The play was set in 1912 before the First World War. He set the play in 1912 because in the Edwardian period society was set into classes that were extremely noticeable. Priestly, after the Second World War, did not want society to go back to the way that it was. Rationing and the Second World War its self had brought the people of England and other countries together. A vision of what a truly socialist Britain would be like was seen during the war. Priestly wanted Britain to move forward and not return to the values of 1912. During 1944 and 1945, j.b priestly created the play an inspector calls an ingenuous interpretation of the Middle Ages set in 1912. Morality play. The play was set in a big old house in brumley were the furniture was big and classy but for show and not for comfort at this very first hurdle in the play we see that the Birlings only care about there appearance also we see that they like to be better than others. In the questions it mentions that Priestley intends to blame all the principal characters by this he means that the people that have do something bad and that have something to hide he will find it and force them to spill the truth. ...read more.

When Sheila heard that inspector Goole wasn't a real inspector, she said "(bitterly) I suppose we're all nice people now." Bitterly shows that she's being sarcastic, and she didn't mean what she said, she meant the opposite. She said this because when they said the truth about everything it makes them nice people, but it doesn't, and she thought that they all were a nice and a perfect family, but her thoughts were wrong after she heard what everyone in her family had done. Sheila's character changed from a girl who had a perfect life, to a caring girl. She couldn't keep the truth from the inspector because he seems to know it already. Mrs. Birling works on a comity that gives people money and help when they are in need this is were Eva went after she lost her job at the shop. Mrs. Birling immediately took a disliking to Eva as she used Mrs. Birlings name because of this she didn't give Eva any money and this leading Eva to prostitution the last thing she could possibly do. Mrs. Birling also tells the inspector that Eva smith was also pregnant and Eva told her that the farther had left her with out a place to live and without any money Eric Mrs. Birlings son was obvious drunk and all the others noticed that when Mrs. Birling was slating the man that left Eva was in fact her own son. Mrs. Birling is very much like her husband she didn't admit to her mistakes and demanded that the inspector leaves her house just like Mr. ...read more.

a relaxed mood but when the inspector walks in the light goes sharper and brighter and also is just focused on the table like a spot light this is to sow that something bad is going to happen. Another device is the setting at the start of the play the house and the furniture are described as big and classy. As we know this is just to improve there social status and also Mr. Birling is only bothered about his night hood that's why he denies all aspects of his doing so in the murder in the play. In conclusion, the Birling family got divided into the parents and the children, the odd thing was that now the children are the more responsible ones and admit their faults, but the parents are ashamed of it and want to hide what they really feel. He admits that he didn't treat Eva well enough when he left her alone. Anyway, she still looked a bit sorry, probably a bit more than Mr. Gerald was also surprised by the inspector, who came in telling him what Gerald has done with Eva Smith. Even though he was the character who harmed Eva Smith the least, he felt very sorry for what he had done. e could begin to fill sorry, because he now feels that he began with all the trouble in Eva Smith's life. She didn't want to realize that what she had done was wrong and treated the theme as if it wasn't so important. He was going to get married with Sheila and the whole reunion was because the family wanted to celebrate that. ?? ?? ?? ?? English course work ...read more.