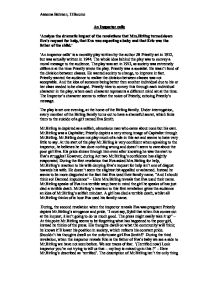 Inspector calls - Analyse the dramatic impact of the revelations that Mrs.Birling turned down Evas request for help, that Eva was expecting a baby and that Eric was the father of the child.

An Inspector calls 'Analyse the dramatic impact of the revelations that Mrs.Birling turned down Eva's request for help, that Eva was expecting a baby and that Eric was the father of the child.' 'An inspector calls' is a morality play written by the author JB Priestly set in 1912, but was actually written in 1944. The whole idea behind the play was to convey a moral message to the audience. The play was set in 1912, as society was extremely different at the time Priestly wrote the play. Priestly was a socialist. He wasn't fond of the division between classes. He wanted society to change, to improve in fact. Priestly wanted the audience to realize the division between classes was not acceptable. And the idea of someone being better then another individual due to his or her class needed to be changed. Priestly tries to convey this through each individual character in the play, where each character represents a different mind set at the time. The Inspector's character seems to reflect the voice of Priestly, echoing Priestly's message. The play is set one evening, at the home of the Birling family. Under interrogation, every member of the Birling family turns out to have a shameful secret, which links them to the suicide of a girl named Eva Smith. ...read more.

'No! Oh - horrible - horrible! How could she have wanted to kill herself?' - The dashes indicate the broken speech of Sheila. When a person is in distress their speech tends to break like their mental state. Sheila's speech reflects how she feels about Eva being pregnant; it affects her so much her speech is almost broken. Unlike her parents Sheila is much wiser. The third revelation doesn't clearly highlight Sheila's opinion on Eric being the father of Eva's unborn child however she seems to have figured out Eric's role in Eva's life before her parents. She tries to warn them, but they do not take any notice of her, which again illustrates her parents' arrogance. '(Distressed) Now, mother - don't you see' - Here Mrs.Birling finally understands Eric's role in Eva's life and Sheila makes clear to her mother what she's been warning her about all along. The adjective used to express Sheila's state gives the audience a glimpse of an idea of Sheila's feelings about Eric being the father. She is obviously suffering, knowing her brother's stupidity could have added to Eva's death. If one were to place a mirror in front of Mrs.Birling, the reflection she'd be staring at would be Mr.Birling, that's how similar Priestly portrays the couple. Mrs.Birling's character reflects her husband's. ...read more.

This would indicate Eric's role in Eva's life, as they are both of a different class. Inspector Goole could be seen as a 'God' figure. God's come down to earth as a spirit to warn the Birling family, to make them aware of the wrong they're doing in life. I personally believe Inspector Goole is a representative of Priestly himself, echoing Priestley's views on socialism. Inspector Goole reveals all three secrets therefore they do not affect his character. However, what he reveals would have a strong dramatic impact on the audience, as all three revelations are extremely effective and shocking. An Inspector Calls gave me a better understanding of the mentality of people during the early twentieth century. The character of inspector Goole gave me a clearer vision of the mindset of a socialist. On the other hand, the character of Mr.Birling gave me a clearer vision of the mindset of a capitalist. The play explores the theme of responsibility and makes me appreciate the current lifestyle we all live. I personally feel the play has a message for everybody: rich or poor, small or tall, black or white - we are all equal in the eyes of God. 'We are members of one body. We are responsible for each other' - Inspector Goole. Azeema Behreen, 11Bourne ...read more.