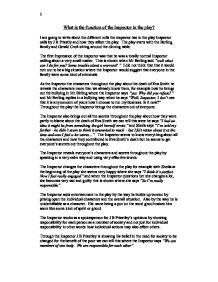 What is the function of the Inspector in the play? I am going to write about the different rolls the inspector has in the play Inspector calls by J B Priestly and how they affect the play. The play starts with the Berling family and Gerald Croft sitting around the dinning table. The first Impression of the inspector was that he was a totally normal Inspector calling about a very small matter. This is shown when Mr Berling said "well what can I do for you? Some trouble about a warrant?" I did not think that that it would turn out to be a big situation where the Inspector would suggest that everyone in the family were some kind of criminals. As the Inspector the characters throughout the play about the death of Eva Smith he reveals the characters more than we already know them, for example how he brings out the bullying in Mr Birling where the Inspector says "yes. Why did you refuse?" ...read more.

The Inspector reveals everyone's characters and secrets throughout the play by speaking in a very calm way and using very effective words. The Inspector changes the characters throughout the play for example with Sheila at the beginning of the play she seems very happy where she says "I think it's perfect. Now I feel really engaged" and when the Inspector questions her she changes a lot, she becomes very sad and guilty this is shown where she says "So I'm really responsible". The Inspector adds entertainment to the play by the way he builds up tension by prising open the individual characters and the overall situation. Also by the way he is unidentifiable as a character. His name being a pun on the word ghoul makes him seem like some kind of spirit or ghoul. The Inspector works as a spokesperson for J B Priestley's opinions by showing responsibility for each person as a member of society and not just for individual responsibility in other words how individual actions may also effect others. ...read more.

He often gives dates and fills in background information. He encouraged each character to acknowledge their guilt for Eva's suicide and to repent. The Inspector never forgives or punishes them. The Inspector is not judgemental. It is up to the characters them selves and the audience. The Inspector makes judgements about the characters which they feel are unusual and inappropriate in a police Inspector. He undermines their complacent assumption that they are respectable citizens. They all find this a terrible experience. Those characters who resist telling the Inspector the truth suffer a lot more then those who are more open. He shows this where he says "If you're easy with me, I'm easy with you". On the surface this play seems to be about the rich and the poor but I think that the Inspector shows us more than that. The play is also talking to the audience. It is about how we should not be self satisfied with our view of the world, whatever our political and religious beliefs. ?? ?? ?? ?? 1 ...read more.