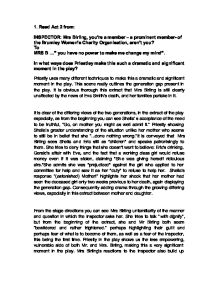 Inspector Calls essay. Act 2. In what ways does Priestley make this such a dramatic and significant moment in the play?

1. Read Act 2 from: INSPECTOR: Mrs Birling, you're a member - a prominent member- of the Brumley Women's Charity Organisation, aren't you? To MRS B ..." you have no power to make me change my mind". In what ways does Priestley make this such a dramatic and significant moment in the play? Priestly uses many different techniques to make this a dramatic and significant moment in the play. This scene really outlines the generation gap present in the play. It is obvious thorough this extract that Mrs Birling is still clearly unaffected by the news of Eva Smith's death, and her families partake in it. It is clear of the differing views of the two generations, in the extract of the play especially, as from the beginning you can see Shelia's acceptance of the need to be truthful, "Go, on mother you might as well admit it." ...read more.

From the stage directions you can see Mrs Birling unfamiliarity of the manner and question in which the Inspector asks her. She tries to talk "with dignity", but from the beginning of the extract, she and Mr Birling both seem "bewildered and rather frightened." perhaps highlighting their guilt and perhaps fear of what is to become of them, as well as a fear of the Inspector, this being the first time. Priestly in the play shows us the less empowering, vulnerable side of both Mr. and Mrs. Birling, making this a very significant moment in the play. Mrs Birling's reactions to the Inspector also build up tension and drama, as she is seen "alarmed" and also "stung" by the questioning, her defiant nature "I did nothing I'm ashamed of", and here we see Mrs Birling is proud of refusing the girl aid. ...read more.

Do you want me to tell you - in plain words?" ;the manner in which the inspector speaks in the extract, helps build up drama as the audience can see that something huge lies ahead, if the inspector to is so obviously quite frustrated at this stage in the play. His underlying repetition of Eric's whereabouts, again sparks up curiosity in the audience and builds up tension and drama, in perhaps Eric is an important factor needed, "(cutting in , sharply) We do need [Eric] him here." The Inspector's language is formal and very direct as he tries to cut through the airs "was it or was it not you influence?", pomposity and euphemisms of the Birling family so they finally understand the truth of the matter i.e. That Eva/Daisy's death was their "responsibility". In conclusion, this extract is a very dramatic and significant moment in the play, due to Priestley's use of stage directions, language and revelations. ...read more.

Shows general understanding of some of the ways Priestley builds up the drama but the points are disorganised. With an extract question, time must be spent carefully reading and annotating the extract before starting to write. The annotations will then help with the structure of the essay. This question is about the Inspector "inspecting" Mrs Birling so the essay must stick closely to what she says and does in the extract. ***