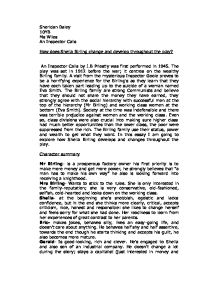 Inspector Calls-How Sheila Birling Changes And Develops Through The Play

Sheridan Daley 10YB Ms Wiles An Inspector Calls How does Sheila Birling change and develop throughout the play? An Inspector Calls by J.B Priestly was first performed in 1945. The play was set in 1912 before the war; it centres on the wealthy Birling family. A visit from the mysterious Inspector Goole proves to be a horrifying experience for the Birling's as they learn that they have each taken part leading up to the suicide of a woman named Eva Smith. The Birling family are strong Communists and believe that they should not share the money they have earned, they strongly agree with the social hierarchy with successful men at the top of the hierarchy (Mr Birling) and working class women at the bottom (Eva Smith). Society at the time was indefensible and there was terrible prejudice against women and the working class. Even so, class divisions were also crucial into making sure higher class had much better opportunities than the lower class, the poor were suppressed from the rich. The Birling family use their status, power and wealth to get what they want. In this essay I am going to explore how Sheila Birling develops and changes throughout the play. Character summary Mr Birling- is a prosperous factory owner his first priority is to make more money and get more power, he strongly believes that "a man has to make his own way" he also is looking forward into receiving a knighthood. Mrs Birling- Wants to stick to the rules. She is only interested in the family-reputation; she is very conservative, old-fashioned, selfish, cold-hearted and looks down on the working class. ...read more.

She hands him the ring (stage directions). This stage direction tells us that the relationship between her and Gerald is over, she is more confident to follow her heart rather than materialistic objects. At the end of Act 2, she is the first to realise Eric's part in the story. Significantly, she is the first to wonder who the Inspector really is, saying to him, 'wonderingly', ' I don't understand about you' She warns the others 'he's giving us the rope - so that we'll hang ourselves' and, near the end, is the first to consider whether the Inspector may not be real. These quotations prove to us that Sheila is wiser, mature and not materialistic. Sheila in Act 2 is in total contrast to herself than in Act 1; she no longer values expensive items and is a lot more confident to speak her mind. (Laughs rather hysterically) 'Why-you fool- he knows. Of course he knows. And I hate to think how much he knows that we don't know yet. You'll see. You'll see.' This quotation shows that she is more alert about the Inspector and she knows he will bring a secret about one of them out into the open. She is becoming more confident and acting more like an adult and not afraid of speaking her mind. 'Don't interfere please father.' This statement tells us that she is more confident and growing up, she say's 'father' which also indicates that her child like ways are over, she is a lot more stern and forward. Sheila becomes more responsible and accepts what she had done wrong. ...read more.

I think she has mainly changed because of the Inspector, if he had not of visited the family she would have still been selfish and a strong Capitalist who depended on her mother for approval. I believe that the point Priestly was trying to make was that people needed to be more caring about their community and the people in it. Priestley uses the character of the Inspector to convey his own thoughts, feelings and opinions about social issues. However, he also uses other characters, particularly Mr. Birling, to show the audience how cynical some people can be. J.B Priestly believed a great deal in Socialism. I think that Priestley set this play in 1912 for a reason. Arthur Birling is a rich businessman who thinks very highly of himself, even though he is often wrong. Arthur's family respect him and listen intently to his ideas that 'there isn't a chance of war' and the Titanic is 'unsinkable.' As the play was written in 1947 and set in 1912, this is an example of dramatic irony and the audience would know that Arthur was very wrong in his opinions and might even think him to be stupid. When he says 'the way some of these cranks talk and write now, you'd think everybody has to look after everybody else', he explicitly says that he is a strong Capitalist and is narrow minded. Priestley wanted the audience to have a low opinion of Birling because he was discouraging at Capitalist politics and trying to show people like Mr Birling to be in the wrong. I feel Priestly wanted to teach the audience community and socialism is always a better way of living than being a capitalist. Sheridan Daley 10yb ...read more.