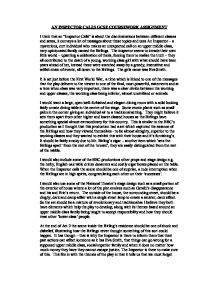 &quot;Inspector Calls&quot; is about the discriminations between different classes and sexes.

AN INSPECTOR CALLS GCSE COURSEWORK ASSIGNMENT I think that an "Inspector Calls" is about the discriminations between different classes and sexes, it conveys a lot of messages about these topics and uses An Inspector - a mysterious, curt individual who makes an unexpected call on an upper middle class, very opinionated family named the Birlings. The inspector seems to invade their own little world - upsetting a celebration of theirs, forcing them to realise the truth - they all contributed to the death of a young, working class girl with what should have been years ahead of her, instead these were snatched away by a greedy, insensitive and selfish chain of events, all down to the Birlings. The girls name was Eva Smith. It is set just before the First World War, a time which is linked to one of the messages that the play delivers to the viewer in one of the final, most powerful, statements and at a time when class was very important, there was a clear divide between the working and upper classes, the working class being inferior, almost uncivilised or animals. I would want a large, open well-furbished and elegant dining room with a solid looking fairly ornate dining table in the centre of the stage. Some exotic plants such as small palm in the corner giving an individual air to a traditional setting. They might believe it sets them apart from other higher and lower classed houses as the Birlings have something special almost extraordinary for this country. This is similar to the BBC's production as I thought that this production had a set which captured the essence of the Birlings and how they viewed themselves - to be almost almighty, superior to the working classes and they wanted to exhibit this with their house and it's furnishing's. It should be fairly smoky due to Mr. Birling's cigar - another item which 'sets the Birlings apart' from the rest of the 'crowd', they are easily distinguished from the rest of the rabble. ...read more.

The most important message is Self Responsibility - this I believe is the most important message of the play. I would have Mr. Birling with an expression conveying his shock and anger at the discovery of Eric's awful mistake, he should be clasping his hands out of stress wringing them together and moving them in an agitated manner. His tone of voice should be quick and panic stricken with a large element of fear upon realising the implications these revelations could bear with them. This should be especially present when he says the line "You're not trying to tell us that - that my boy - is mixed up in this -?", as this is the one line which emphasises Mr. Birling finally realising that there is no easy way out of a predicament they are in and a terror suddenly grips him as he realises the full scale of what the family have done. Mrs. Birling should seem defiant before she finally realises that Eric is "Mixed up in this", and her face should change from stony, hard resolve to not get caught out by the Inspector to one of utter shock, slight embarrassment and disbelief at what she has just heard as she has almost 'used the last nail in Eric's coffin'. When defiant I would have Mrs. Birling's voice with an icy edge to it, treating the Inspector with contempt, slight authority and inferiority, she should talk slowly, clearly and coolly although raising her voice at points to show her authority as in the line " Instead of staying of staying here asking quite unnecessary questions" this should be performed much like the National Theatre's although slightly quieter as I think that they took the raised voice slightly too far. Her eyes should glare slightly displaying her resentment at the Inspectors rude interruption. All this should change however when Mrs. Birling learns the truth. ...read more.

us that - that my boy - is mixed up in this", I think the panic in those words might also be for his son as, after all, Eric is Birling's son and there is still a kind of love between them. The audience might spot this and feel for the first time sadness, pity and sympathy for Mr. Birling. I do not think that the audience will sympathise with Eric as they have only just heard the revelations from the Inspector and Mrs. Birling and have not heard Eric's defence and whether or not he regrets his most dreadful of mistakes. I think this scene should, if acted well, be one if not the most convincing scenes of the entire play. It uses a very well structured utterly believable story line and ends on a very climatic albeit convincing note which is held in the viewers mind, remembered and hopefully considered and applied to everyday life. It holds many messages which I believe "An Inspector Calls" was written to convey most importantly that we should all accept responsibility for our actions and why we should treat everyone as individuals, if there is no responsibility, equality and community the human race will degenerate. I would hope that the audience would expect a climatic concluding scene where we learn the truth about the whole family's involvement in the degeneration of a young woman's will to live. If the play was well produced they would expect to learn the extent of which class and superiority has gone to destroy a life and how the Birlings can go about improving their lifestyles to accommodate for the rest of the world, especially the working 'inferior' classes. They should expect the Inspector to be able to almost convert the Birling's lives to ones which can help other people to unite and accept responsibility where it is needed as this is what J.B. Priestley has tried to do with his most provocative of plays - "An Inspector Calls". [MB1] [MB1] ...read more.