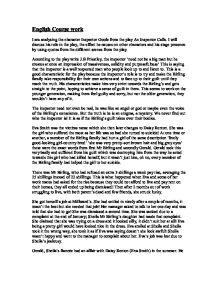 English Course work I am analysing the character Inspector Goole from the play An Inspector Calls. I will discuss his role in the play, the effect he causes on other characters and his stage presence by using quotes from the different scenes from the play. According to the play write J.B Priestley, the inspector 'need not be a big man but he creates at once an impression of massiveness, solidity and purposefulness' This is saying that the inspector is a well respected man who people look up to and listen to. This is a good characteristic for the play because the inspector's role is to try and make the Birling family take responsibility for their own actions and to face up to their guilt until they reach the truth. His characteristics make him very strict towards the Birling's and gets straight to the point, hoping to achieve a sense of guilt in them. This seems to work on the younger generation, making them feel guilty and sorry, but not the older generation, they wouldn't have any of it. The inspector need not even be real, he was like an angel or god or maybe even the voice of the Birling's conscience. But the truth is he is an enigma, a mystery. We never find out who the inspector is! It is as if the Birling's guilt takes over their bodies. Eva Smith was the victims name which she then later changes to Daisy Renton. ...read more.

Eric got it from Mr Birling's (his dads) office. He said that he had intended pay it back. Eric could not trust his dad and talk to him so he had to steal the money from him! So is this partly Mr Birling's fault as a father not being there and Eric not feeling comfortable talking to him? Can we blame Mr Birling? I think we can to a certain extent but he can take responsibility for his own actions, let alone his sons as well! The inspector's effect on Mr Birling was that he didn't really seem sorry or guilty at all. He must have felt a little guilty though because he tried to pass the blame on to some one else and said, 'obviously it has nothing whatever to do with the wretched girls suicide.' The thing which he was saying hasn't got any thing to do with it, was him dismissing her from her work. Sheila however felt ever so guilty for getting her sacked from Millward's she didn't know what to do. She knew she was wrong and she was sorry for it but she didn't want to hold the whole blame to herself. But she didn't need to. Gerald confesses everything to the inspector, Sheila and the rest of the family. He admits to having an affair and I think that helps him clear his conscience but he didn't take much responsibility towards Eva's suicide though. ...read more.

The message I picked up from the play is to take responsibility for your own actions and treat others how you wish to be treated because I wouldn't want to be treated how Eva got treated, so in fairness the Birling's should get it all back but no one is horrible enough to treat any one person so badly they have to turn to suicide. But I feel that the Birling's did get it back right in their faces and all at one time though guilt. They are going to have to live with the guilt for the rest or their lives: I mean could you sleep at night knowing you had helped someone to their death? I know I couldn't! I think that J.B Priestley's ideas are correct like the class system is wrong and everyone does deserve the right to be treated equally. Sheila and Eric do agree with this to which gives hope for the future and youth will have better views towards Things like the class system etc. The play I think is successful and does make you think in the terms that young people would want to be the hero's in the play and I believe that the hero's were Eric and Sheila or the Youth. These problems aren't relevant today because we don't stick by the class system and we do try to treat others equally but we do have similar problems like war where people should look and admit their wrong just like Sheila and Eric I believe they have set a good example for the readers. ...read more.