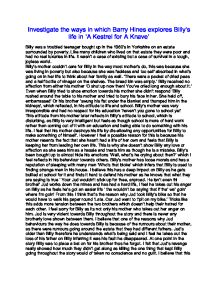 Investigate the ways in which Barry Hines explores Billy's life in 'A Kestrel for A Knave'.

Investigate the ways in which Barry Hines explores Billy's life in 'A Kestrel for A Knave' Billy was a troubled teenager bought up in the 1960's in Yorkshire on an estate surrounded by poverty. Like many children who lived on that estate they were poor and had no real luxuries in life. It wasn't a case of existing but a case of survival in a tough, joyless world. Billy's mother couldn't care for Billy in the way most mother's do, this was because she was living in poverty but also because she was feckless and too self absorbed in what's going on in her life to think about her family as well. 'There were a packet of dried peas and a half bottle of vinegar on the shelves. The bread bin was empty.' Billy received no affection from either his mother 'O shut up now then! You've cried long enough about it.' Even when Billy tried to shoe emotion towards his mother she didn't respond 'Billy rushed around the table to his mother and tried to bury his face in her. She held off, embarrassed' Or his brother 'swung his fist under the blanket and thumped him in the kidneys', which reflected, in his attitude to life and school. Billy's mother was very irresponsible and had no respect for his education 'haven't you gone to school yet' This attitude from his mother later reflects in Billy's attitude to school, which is disturbing, as Billy is very intelligent but feels as though school is more of hard work rather than coming out of it with an education and being able to do something with his life. I feel that his mother destroys his life by dis-allowing any opportunities for Billy to make something of himself. However I feel a possible reason for this is because his mother resents the fact that she hasn't had a life of her own and feels that Billy is keeping her from leading her own life. ...read more.

Throughout school Billy was bullied not only by his teachers, his brother but by the pupils as well. It was hard for Billy, as there wasn't any one he could talk to. The main person who continually bullied Billy was a lad called 'Macdowall'. He bullied Billy about anything he could however the main thing was over Billy's family. This really got to Billy as Macdowell was 'bad mouthing' his mother, father and his brother. Even though Billy's mother and brother didn't really care for him he still defended them, which shows great loyalty 'What is he then, my sister?' There's one scene were Billy and Macdowell are fighting in the yard and Mr Farthering breaks up the fight and teaches Macdowell a lesson for picking on people younger than him. This was the first time some one stuck up for Billy and showed any affection towards him, as many teachers would have sent them to have the cane. I believe Mr Farthering did this, as he felt sorry for Billy 'I don't know, you always seem to cop it, don't you, Casper?' Billy then confided in Mr Farthering about how he felt about the teachers and the way they treat the pupils 'Teachers. They never think it might be there fault an' all' Billy forgets that Mr Farthering is a teacher and I believe this is because Mr Farthering has been more of a friend to Casper than a teacher 'You daren't say that to t'teacher though, they'd say 'don't be insolent boy, 'smack!' Billy even admits to Mr Farthering that he can talk to him, and again this is one of the rare times he expresses his feelings 'An' anyway...I can talk to you better than most folks.' Its clear that Billy has a lot of respect for Mr Farthering an can trust him and appreciate the interest that Mr Farthering takes in him 'This hawk of yours, id like to see it sometime' In the scene were Mr Farthering goes and ...read more.

He feels safe and secure. In a sense I feel that the bird is seen as an image of Billy's dad because when Billy found out that Kes was dead he had flashbacks of his dad. It infers that losing Kes was like the loss he felt when his dad was no longer around 'Where are you goin' dad?' The writer compares the loss of the bird and Billy's dad in detail and uses flashbacks to show the reader the comparison between the two. The language Hines uses creates a more realistic image of Billy and his life. He uses slang 'shit' to make it more personalised and to make the reader feel as though they are they're with Billy through the story. Hines uses detail when writing about Billy's more happily times like when he is with Kes and when he refers to his dad and the 'tall story'. Hines uses a Yorkshire accent to make it more real 't'day', which helps create a more defined image of the characters. The whole novel is based on just one day in Billy's life Hines does this by using flashbacks to show in depth what the characters are like so that the reader has a better understanding of what the character's personalities really like. Hines uses short sentence to create effect and emphasise the normality of Billy's daily routine 'Billy left the shop.' Therefore I conclude that living in poverty does have an effect on peoples attitudes and how they respond to others, the harshness of their lives portray in their behaviour to others. This book really shows how much teaching has changed, I believe for the better, since the 1960's. As in the school life we see in this book the teachers enjoy the power and humiliating the children, whereas nowadays most teachers aim in their career is to make a difference and to help as much as they can. I believe that Hines shows how harsh and cold life can be and can make us more fortunate people appreciate life more and not take food and people's kindness for granted. ...read more.