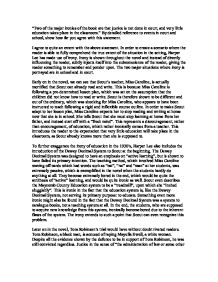 Irony in To Kill A Mockingbird

"Two of the major ironies of the book are that justice is not done in court, and very little education takes place in the classroom." By detailed reference to events in court and school, show how far you agree with this statement. I agree to quite an extent with the above statement. In order to create a scenario where the reader is able to fully comprehend the true extent of the situation in the setting, Harper Lee has made use of irony. Irony is shown throughout the novel and instead of directly influencing the reader, subtly injects itself into the subconscience of the reader, giving the reader something to remember and ponder upon. The two major situations where irony is portrayed are in school and in court. Early on in the novel, we can see that Scout's teacher, Miss Caroline, is actually mortified that Scout can already read and write. ...read more.

The Dewey Decimal System was designed to have an emphasis on "active learning", but is shown to have failed its primary intention. The teaching method, which involved Miss Caroline waving off cards which had words such as "cat", "rat" and "man" at her students, was extremely passive, which is exemplified in the novel when the students hardly do anything at all. They become extremely bored in the end, which would be quite the antithesis of "active" learning, and would be quite ironic as well. Scout even describes the Maycomb County Education system to be a "treadmill", upon which she "inched sluggishly". This is ironic in the fact that the education system is, like the Dewey Decimal System, not serving its primary purpose: to educate. Something even more ironic might also be found in the fact that the Dewey Decimal System was a system to catalogue books, not a teaching system at all. ...read more.

Rather, Atticus believes that Tom Robinson would have a "reasonable chance at appeal". That such injustice should take place in a courtroom, of all places, shows readers the extreme irony of the situation. Where justice should by rights be enacted, it is instead injustice which reigns supreme. Where all people regardless of race should be regarded equal, whites are regarded as being better than other races. Where all evidence supports the cause of the defence, it is instead the personal prejudices of the jury which decides the course of events. That law itself might be bent due to the racist notions of the jury and townspeople of Maycomb County show the readers the ultimate irony as can be found in the novel. By masterfully combining the use of irony in these two situations and skilfully integrating it together with the other themes, symbols and various concepts in the storyline, Harper Lee has created a work which will forever be embedded in readers' minds as a true masterpiece of literature. ...read more.