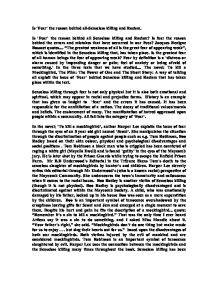 Is 'Fear' the reason behind all-Senseless killing and Racism.

and is found 'guilty' in the eyes of the Maycomb jury. He is later shot by the Prison Guards while trying to escape the Enfield Prison Farm. Mr B.B Underwood's Editorial in the Tribune likens Tom's death to the senseless slaughter of mockingbirds by hunter's and children. Harper Lee cleverly writes this editorial through Mr Underwood's (who is a known racist) perspective of the Maycomb Community. She underscores the town's immaturity and callousness when it comes to the racial issues. Boo Radley is another victim of Senseless killing (though it is not physical). Boo Radley is psychologically disadvantaged and is discriminated against within the Maycomb Society. A child, who was emotionally damaged by his father, locked up in his house Boo was seen as a mere superstition by the children. Boo is an important symbol of innocence overshadowed by the creepiness leaving gifts for Scout and Jem and emerged at a single moment to save them. ...read more.

On September 13, 2001 approximately 3 years ago pizza delivery man Michael Choy had been murdered. A man aged 40, had received a phone call from Rawiri, 17 (who has been convicted of manslaughter, attempted aggravated robbery and aggravated robbery) who had placed on order for 2 pizza's to be delivered in Papakura. When he arrived to the identified place he was ambushed, robbed and severely beaten to death with a baseball bat and died on his way to hospital. Six teenagers were convicted of the murder and manslaughter. All who were convicted were enslaved by 'fear'.... (quote), "Why did you do it"..." At the time I thought it was cool. I just did it to show how tough I was. I didn't want to be seen as a fagot".... Peihopa; 16 (who was convicted of manslaughter). Senseless killing does not only exist in novels, but in reality. This example supports the statement of 'fear' ?? ?? ?? ?? ...read more.