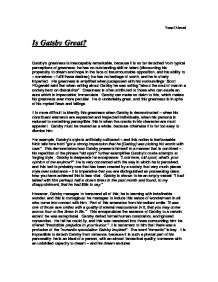 Yousif Ahmad Is Gatsby Great? Gatsby's greatness is inescapably remarkable, because it is so far detached from typical perceptions of greatness: he has no outstanding skill or talent (discounting his propensity to dream and hope in the face of insurmountable opposition, and his ability to - somehow - fulfil these desires), he has no heritage of worth, and he is utterly imperfect. His greatness is amplified when juxtaposed with his surroundings: Scott Fitzgerald said that when writing about Gatsby he was writing "about the soul of man in a society bent on dissolution". Greatness is often attributed to those who can exude an aura which is impeccable, immaculate. Gatsby can make no claim to this, which makes his greatness ever more peculiar. He is undeniably great, and this greatness is in spite of his myriad flaws and failings. It is more difficult to identify this greatness when Gatsby is deconstructed - when his constituent elements are separated and inspected individually, when his persona is reduced to something perceptible: this is when the cracks in his character are most apparent. Gatsby must be treated as a whole, because otherwise it is far too easy to dismiss him. For example, Gatsby's style is artificially cultivated - and this notion is ineffaceable. Nick tells how he'd "got a strong impression that he [Gatsby] was picking his words with care". ...read more.

Much of this dissolves into irrelevance when placed next to Gatsby as an ideal: his greatness is not derived from his achievements or tactile measurements of his success and wealth. His capacity to dream is the central facet of Gatsby's greatness. Gatsby's dream is one of not being as much as it is one of being. He says to Nick "I didn't want you to think I was just some nobody". He was desperate to avoid the anonymity and apparent mediocrity into which he was born: "his parents were shiftless and unsuccessful farm people - his imagination had never really accepted them as his parents at all." T Tanner elaborated: "in the frontier tradition of self-reliance lies the genesis of what impels Gatsby" The imagination of Gatsby is a crucial aspect of him: it is dynamic and tireless, and its potential facilitated his self-invention. Gatsby has entirely invented his own character, the name-change from James Gatz to Jay Gatsby representing his absolute metamorphosis. Tragically, Gatsby attaches his dream to another person: Daisy. Human fallibility is not acknowledged by Gatsby, and his dreams are inevitably unworthy of her. Gatsby invests Daisy with an idealistic perfection that she cannot possibly attain, and he pursues her with such passionate zeal that he is blinded to her limitations - her human limitations. When Gatsby is transported out of his self-enclosed world of parties and dreams, he has terrible difficulty in adjusting - a difficulty which he ultimately cannot overcome. ...read more.

The mysterious green light mutated into something even more tangible, a genuine contour of Daisy's body that he could touch and hold. This is undoubtedly the truly great in Gatsby: most dreamers will idle their lives away with wishful and wistful thoughts of possibilities, but Gatsby has the determination to actually realise his dreams. M Hindus said of Scott Fitzgerald that "when it came to his art he was a master; when it came to the conduct of his life, he was a failure", and this is just as indisputably resonant when it comes to Gatsby and his art of dreaming. And - as with all romantic greats - there is an inevitable tragedy about him, a tragedy propagated by his success. Gatsby faces up to the disappointment - the disappointment of Daisy not being able to support the intense burden he put on her, the disappointment of most humans failing to recognise his idiosyncratic and undeniably romantic logic, the disappointment of his dream - with remarkable resolve: his hopes endure. "'How long are you going to stand there?' 'All night, if necessary'". Gatsby could have - should have - given up. He could have been emasculated, reduced to an emaciated, cynical man who had been let down. He could have allowed himself to be reduced to the merely human. Gatsby - tragically, poignantly, beautifully - persisted, still "clutching at some last hope". ...read more.