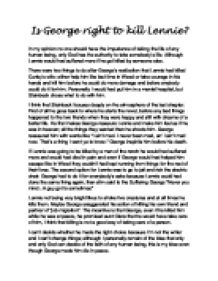 Is George right to kill Lennie?

Is George right to kill Lennie? In my opinion no one should have the impudence of taking the life of any human being, only God has the authority to take somebody's life. Although Lennie would had suffered more if he got killed by someone else. There were two things to do after George's realization that Lennie had killed Curley's wife: either help him like last time in Weed or take courage in his hands and kill him before he could do more damage and before anybody could do it for him. ...read more.

He first makes George reassure Lennie and make him feel as if he was in heaven; all the things they wanted then he shoots him. George reassured him with words like "I ain't mad. I never been mad, an' I ain't mad now. That's a thing I want ya to know." George inspirits him before his death. If Lennie was going to be killed by a man of the ranch he would had suffered more and would had died in pain and even if George would had helped him escape like in Weed they couldn't had kept running from things for the rest of their lives. ...read more.

Maybe George exaggerated his action of killing his own friend and partner of "job migration". The incentive is that George, even if he killed him while he was at peace, he promised aunt Clara that he would have take care of him, I think that killing is not a good way of taking care of a person. I can't decide whether he made the right choice because I'm not the writer and I can't change things; although I personally remain of the Idea that only and only God can decide of the faith of any human being, this is my idea even though George made him die in peace. ...read more.