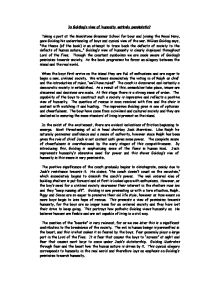 Is Golding's view of humanity entirely pessimistic? Taking a post at the Maidstone Grammar School for boys and joining the Royal Navy, gave Golding his understanding of boys and cynical view of the war. William Golding says, "the theme (of the book) is an attempt to trace back the defects of society to the defects of human nature..." Golding's view of humanity is clearly displayed throughout Lord of the Flies. Through the constant symbolism we are made aware of Golding's pessimism towards society. As the book progresses he forms an allegory between the island and the real world. When the boys first arrive on the island they are full of enthusiasm and are eager to begin a new, civilised society. We witness immediately the voting in of Ralph as chief and the introduction of rules, "we'll have rules!" The conch is discovered and instantly a democratic society is established. As a result of this, assemblies take place, issues are discussed and decisions are made. At this stage there is a strong sense of order. The capability of the boys to construct such a society is impressive and reflects a positive view of humanity. The question of rescue is soon resolved with fire and the choir is content with watching it and hunting. The impression Golding gives is one of optimism and cheerfulness. ...read more.

Golding elucidates his pessimistic view of humanity through the hopeless position Jack and the others find themselves in. Ralph's authority over the boys also becomes limited. The fact that Ralph and Jack's order of priorities are so different, Ralph's being the "fire" and Jack's being "hunting", at once results in a division within the group. This division eventually results in Jack's dictatorship over a majority of the boys. Jack's style of leadership is based on domination and fear. What he can't control he seeks to destroy, which contributes to downfall of the island. This demonstrates how Golding observes the world as in discord. He sees humanity as incapable of living in amity, which reveals his view of pessimism. Simon is a significant character in The Lord of the Flies. He is seen as pure and unaffected by the evil of the island. He is part of neither Jack's or Ralph's tribe, which immediately alienates him from the group. Simon sees beyond the surface of things and it is for this reason that he was able to confront the "beastie" and find out the truth. Golding said that Simon represented the good of all mankind. Therefore the act of rejection towards him from the other boys illustrates how in the real world humanity discards goodness. This idea formed by Golding confirms his negativity towards human kind. ...read more.

Thus, when looking at the circumstance from Golding's pessimistic view, we come to realise with reluctance that the purpose of being rescued is now merely pointless. During the Lord of the Flies we are taken through many stages of the boy's lives on the island, each of which end in disaster as a result of "the darkness of man". We observe the rise of dictatorship and the fall of democracy, as the boy's personal relationships break apart. We witness the development of savagery and primitive behaviour, eventually resulting in the death of Simon and Piggy, who together powerfully represented goodness and order. Finally we watch as the boy's pitiful fear, develops into the breakdown of the society. The evilness of the beast was only a manifestation of the boy's fears alone, so ultimately it was the boy's fears that led to the downfall in their civilization. Like Golding said, the defects of society are due to the defects in the human nature. From this statement we can draw a parallel between the evil in the world and the essential flaws within man. Therefore we can understand from the Lord of the Flies that William Golding believes humanity to be completely defective. We can gather that he considers even the traces of goodness and order among humanity unable to stand against the wickedness and hostility of man. Thus we can conclude that William Golding's view of humanity is entirely pessimistic. Angela Stride 11C ...read more.