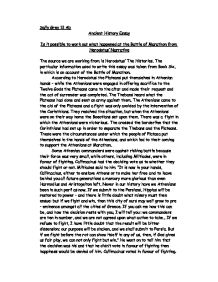 Is it possible to work out what happened at the Battle of Marathon from Herodotus' Narrative.

Sally Grey 12 Ab Ancient History Essay Is it possible to work out what happened at the Battle of Marathon from Herodotus' Narrative The source we are working from is Herodotus' The Histories. The particular information used to write this essay was taken from Book Six, in which is an account of the Battle of Marathon. According to Herodotus the Plateans put themselves in Athenian hands - while the Athenians were engaged in offering sacrifice to the Twelve Gods the Plateans came to the altar and made their request and the act of surrender was completed. The Thebans heard what the Plateans had done and sent an army against them. The Athenians came to the aid of the Plateans and a fight was only avoided by the intervention of the Corinthians. They resolved the situation, but when the Athenians were on their way home the Boeotians set upon them. There was a fight in which the Athenians were victorious. ...read more.

He went on to tell him that the decision was his and that he didn't vote in favour of fighting then happiness would be denied of him. Callimachus voted in favour of fighting. Miltiades waited to fight until the day that he held the presiding position. The Athenians charged towards the Persians. The Persians prepared themselves to meet them, but were expecting an easy fight, thinking that the Athenians were mad to risk an assault with so small an army. The Athenians chased the routed enemy until they came to the sea. All but seven ships got away carrying Persians - they hoped to reach Athens before the Athenians. The Athenians got there first and beat the Persians. However, an un - named source says: In 490 BC the most influential man in Athens was Miltiades. This nobleman, whose family had fled from the tyrants and founded a colony in the Thracian Chersoneus from which the Persian advance had driven them, embodied the spirit of resistance. ...read more.

- and years after, people's memories of the battle are going to be fairly poor - things will be exaggerated and confabulated. We also know that Herodotus was pro - Athenian because they adopted him as a story teller - which we must remember he was, hence he deviates from the story. Could it be tht he was employed by the Athenians to write an account of the battle, writing favourably about them? In conclusion I would say that while Herodotus' works give us a rough idea of what happened in the Battle of Marathon, we must not trust what we read, and the help of simplified accounts will help to make the event clear in our heads. However, these accounts are based on his works so we cannot wholly trust any account and so yes, we can work out some of what happened in the Battle of Marathon because some things have been backed up by scientific evidence, but no, we can not work out the entire happenings of the battle. ...read more.