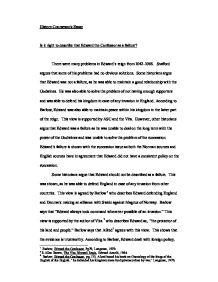 Is it right to describe Edward the Confessor as a failure?

History Coursework Essay Is it right to describe that Edward the Confessor as a failure? There were many problems in Edward's reign from 1042-1066. Stafford argues that some of his problems had no obvious solutions. Some historians argue that Edward was not a failure, as he was able to maintain a good relationship with the Godwines. He was also able to solve the problem of not having enough supporters and was able to defend his kingdom in case of any invasion in England. According to Barlow, Edward was also able to maintain peace within his kingdom in the latter part of the reign. This view is supported by ASC and the Vita. However, other historians argue that Edward was a failure as he was unable to deal on the long term with the power of the Godwines and was unable to solve the problem of the succession. Edward's failure is shown with the succession issue as both the Norman sources and English sources have in agreement that Edward did not have a consistent policy on the succession. Some historians argue that Edward should not be described as a failure. This was shown, as he was able to defend England in case of any invasion from other countries. This view is agreed by Barlow1 who describes Edward defending England and Denmark making an alliance with Swein against Magnus of Norway. Barlow says that "Edward always took command whenever possible of an invasion." This view is supported by the author of Vita 2 who describes Edward as, "the protector of his land and people." Barlow says that Ailred3 agrees with this view. This shows that the evidence is trustworthy. According to Barlow, Edward dealt with foreign policy, by stopping William from forming an alliance with Flanders. This was because Flanders and Normandy had maritime power and if they formed an alliance, they would have been able to share maritime power and help Swein, Magnus or Harold Hardrada from invading England. ...read more.

Therefore it is most probable that Barlow is giving an accurate account. Therefore, it is right to describe Edward as a failure, as he was unable to make Godwine fear him. Edward's achievement of putting Godwine into exile was only a short-term success as Edward was unable to expel them in 1052. Edward was not able to expel the Godwines as he did not have support from Siward and Leofric. Historians such as Barlow and Stenton agree that Edward had no alternative but to allow the Godwines to return in 1052. In addition Godwine had much support from Wessex and the London citizens. Stafford1 describes that he 'was not swept back on a tide of popular enthusiasm.' However, the Vita2 contradicts the view of Stafford and agrees with ASC (D) mentioning 'the whole city went out to help and protect the earl.' According to Stafford3, Ralf and Odda were supposed to receive reinforcements and help resist the Godwine's army, but by the time Edward's army had assembled, Godwine's army had already arrived London. Therefore, it is likely to describe Edward as a failure as he was unable to mobilize an army, lacking as he did the support of Leofric and Siward. Harold became Earl of Wessex, after Godwine died in 1053. Edward was unable to stop Harold from becoming over mighty and allowed him to gain more land. Tostig was then appointed to Northumbria in 1055 after Siward's died, and in 1057 Harold took over from Ralf in the Welsh marchers. By 1057 therefore all the earldoms except for Mercia were in the hand of the Godwines, so was a failure as he was unable to stop Harold from becoming over mighty. Campbell4 agrees with the view and supported by Stenton5, 'Harold had a great deal of influence in southern England, where the centre of national authority lay.' Furthermore, Edward was unable to deal with Welsh and Scottish Affairs, but instead had to depend on Harold. ...read more.