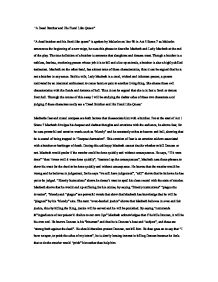 Is Macbeth a dead Butcher?

'A Dead Butcher and His Fiend Like Queen" "A dead butcher and his fiend-like queen" is spoken by Malcolm on line 98 in Act 5 Scene 7 as Malcolm announces the beginning of a new reign, he uses this phrase to describe Macbeth and Lady Macbeth at the end of the play. The true definition of a butcher is someone that slaughters and dresses meat. Though a butcher is a ruthless, fearless, murdering person whose job it is to kill and slice up animals, a butcher is also a highly skilled tradesman. Macbeth on the other hand, has almost none of these characteristics, thus it can be argued that he is not a butcher in any sense. But his wife, Lady Macbeth is a cruel, wicked and inhuman person, a person motivated by an irrational enthusiasm to cause harm or pain to another living thing. She shares these evil characteristics with the fiends and demons of hell. Thus it can be argued that she is in fact a fiend or demon from hell. Through the course of this essay I will be studying the darker sides of these two characters and judging if these characters really are a 'Dead Butcher and His Fiend Like Queen' Macbeths fear and moral compass are both factors that disassociate him with a butcher. For at the start of Act 1 Scene 7 Macbeth divulges his deepest and darkest thoughts and emotions with the audience, he shows fear, for he uses powerful and emotive words such as "bloody" and he constantly refers to heaven and hell, showing that he is scared of being trapped in "Deepest damnation". ...read more.

These harsh truths about his wife's true being and nature hit Macbeth like a wall and throw him off balance. Once a powerful military commander, Macbeth is now being told and shouted at by a woman. Lady Macbeth seems to be commanding him to do the deed. She uses emotional blackmail and her sexual hold over him in order to impose her feelings of disdain and pure contempt for his moral way of thinking. Now Macbeth once again changes his mind about the murder because of his wife's violent onslaught of insults and abuse. But he is still worried about the consequences; he asks 'If we should fail?' She replies once again with a fierce and decisive answer, she tells him to "screw your courage"; she lets Macbeth know that his lack of courage will not stop her reaching her goal. She tells him that if he keeps his nerve they would not fail. But also she could be seen as showing signs of cowardice, for she says " When Duncan is asleep", this could be seen as a sign that she does not wish to look Duncan in the eye when they kill him. It can be further argued that if she really was a fearless and uncaring person she would have not waiting for her husband to gain the courage and she would have simply done the deed herself without him. Lady Macbeth is co-dependent on her husband, without his drive for his own selfish ambition she would not able to manipulate him toward the murder. ...read more.

He shows at the beginning of the play that he knows right from wrong, and chooses to do wrong without being able to justify it to himself. He knows the "even hand of justice" and he is scared that his deeds will "plague the inventor", he believes himself to be the inventor of the bloody deed. Ultimately, he is unable to bear the thought of the consequences of his actions. Lady Macbeth on the other hand can most defiantly be described as a fiend or demon, she is a woman of strong will who is ambitious for herself and who is astute enough to recognize her husband's strengths and weaknesses, and ruthless enough to exploit them, she exploits her sexual hold over Macbeth as a means to persuade him to commit murder. She manipulates and preys on the moral conscience of Macbeth. Unlike her husband, she lacks all humanity, we see her in the opening scenes, calling upon the "Spirits that tend on mortal thoughts" to deprive her of her feminine instinct to care. Lady Macbeth persistently taunts her husband for his lack of courage, even though he is known of his bloody deeds on the battlefield. But in public, she is able to place on a mask and hide her true nature. She uses her female finesse to avoid the gazing eyes of judgment and cruelly twists Macbeth to her will of evil and deceit. Though it may be arguable that Macbeth is evil and his wife is not, there is sufficient argument to counteract this statement as shown my essay. ?? ?? ?? ?? ...read more.