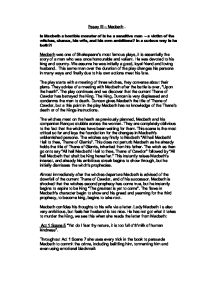 Is Macbeth a horrible monster of is he a sensitive man - a victim of the witches, chance, his wife, and his own ambitions? In a curious way is he both?!

Essay III - Macbeth . Is Macbeth a horrible monster of is he a sensitive man - a victim of the witches, chance, his wife, and his own ambitions? In a curious way is he both?! Macbeth was one of Shakepeare's most famous plays, it is essentially the story of a man who was once honourable and valiant. He was devoted to his king and country. We assume he was initially a good, loyal friend and loving husband. This same man over the duration of the play changes his persona in many ways and finally due to his own actions meet his fate. The play starts with a meeting of three witches, they converse about their plans. They advise of a meeting with Macbeth after the battle is over, "Upon the heath". The play continues and we discover that the current Thane of Cawdor has betrayed the King. The King, Duncan is very displeased and condemns the man to death. Duncan gives Macbeth the title of Thane of Cawdor, but a this point in the play Macbeth has no knowledge of the Thane's death or of the Kings instructions. ...read more.

The flaws in Macbeth's character begin to show and his greed and yearning for the third prophecy, to become king, begins to take root. Macbeth confides his thoughts to his wife via a letter. Lady Macbeth is also very ambitious, but feels her husband is too nice. He has not got what it takes to murder the King, we see this when she reads the letter from Macbeth: Act 1 Scene 5 "Yet do I fear thy nature, it is too full o'th'milk of human kindness". Throughout Act 1 Scene 7 she uses every trick in the book to persuade Macbeth to commit the crime, including belittling him, tormenting him and even using emotional blackmail: Act 1 Scene 7 "From this time, such I account thy love". Macbeth is ultimately persuaded and goes on to murder the King. After the death of Duncan he is plagued with guilt and it is apparent that it was only personal gain and greed that made him commit the murder. He actually considered Duncan a good King. ...read more.

Even in the later event of Lady Macbeth's suicide he seems to show very little remorse. I do feel however that Macbeth was a victim, a weak man that initially allowed others to manipulate him, until finally there was no going back. In the fight to prevent his bad deeds being found out his crimes continued. He was trying to cover his tracks but was actually digging himself a far deeper hole. Once the witches had put the ideas in his head, sowed the seeds so to speak. It only took Lady Macbeth to nurture the seeds and begin the evil roller coaster of events. Towards the end of the play it seems Macbeth is very vulnerable and exposed. He was a very greedy man and was tempted by things that were wrong. I think if chance had not led Macbeth to the witches or if Duncan had not visited Macbeth's home the story may have been very different. He was an extremely ambitious man who gained power by ill-gotten means. But in his quest to hang on to his dream he lost his grip on reality. His wife and the witches were his initial downfall, however his own ambition and greed was inevitably his worst enemy. ...read more.

This pupil has dealt with the question well. They have used evidence from the text but a more detailed look at language would have improved this.