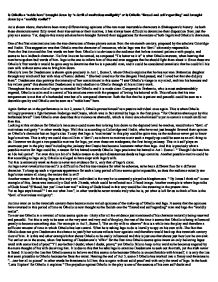 Is Othello a 'noble hero' brought down by 'a devil of motiveless malignity' or is Othello 'flawed and self regarding' and brought down by a 'worldly realist'? As is shown above, there have been many differentiating opinions of the two most inscrutable characters in Shakespeare's history. As both these characters never fully reveal their true selves or their motives, it has always been difficult to determine their disposition from just the play as a source. Yet, despite this many scholars have brought forward their suggestions for the nature of both Iago's and Othello's characters. One of the first examinations into the true characters of these players comes from the nineteenth century, proposed by the scholars Coleridge and Haditt. This suggestion was that Othello was the character of innocence, whilst Iago was the 'devil' ultimately responsible. From the first time and the first words we hear from Othello it is obvious to the audience that he has a natural patience with people, and seems to be a laidback character. His first line can be termed, as composed "Tis better as it is" is what Othello answers, when hearing that men have spoken bad words of him. Iago is the one to inform him of this and even suggests that he should fight them about it. Since these are Othello's first words it would be quite easy to determine that he is a peaceful man, and it could be considered unrealistic that he could kill his own wife without some one to bring him down. Othello's love for Desdemona is shown quite precisely in Act 1, Scene 3, where Othello explains that he has not won Brabantios daughter through any witchcraft but with tales of heroic defeats. " She had loved me for the dangers I had passed, and I loved her that she did pity them". Desdemona also portrays the intensity of her commitment in this scene "I saw Othello's visage in my mind, and two his honours and his valiant parts" this shows that Desdemona is truly obedient to Othello through all his military work. ...read more.

Iago states here he suspects Othello may have slept with his wife. He is not sure of this, but declares that surety is not necessary. I believe Iago is not so much concerned with his wife being unfaithful, but that he can't stand the thought that it may have been with Othello. (Act 1, Scene 3, 381-382) He holds me well; The better shall my purpose work on him. This shows how conniving Iago is. He will use the fact that Othello trusts him to get his revenge. (Act 1, Scene 3, 383-385) Cassio's a proper man. Let me see now; To get his place, and to plume up my will In double knavery. How? How? Let's see. Here "double knavery" means to pull off one stunt and obtain two desired outcomes - to get Cassio's position (which he felt he deserved) and to make himself appear respectful for his ego's sake. Another benefit of getting Cassio's position is he can be closer to Othello. When he accomplishes this, he will be able to obtain even more trust from Othello and begin manipulating him to believe that Cassio and Desdemona are having an adulteress relationship: (Act 1, Scene 3, 386-389) After some time, to abuse Othello's ears That he is too familiar with his wife. He hath a person and a smooth dispose To be suspected - framed to make women false. Iago knows that Othello is a man of integrity and therefore, believes others to be so until proven differently. Iago has no respect for integrity and consequently, has no respect for Othello. This is obvious in his reference to Othello as an "ass" which can "tenderly be led by th' nose." (Act 1, Scene 3, 390-393) The Moor is of a free and open nature That thinks men honest that but seem to be so; And will as tenderly be led by th' nose As asses are. ...read more.

He condemns her as a "simple bawd" and a "whore", which he has no real proof of. Iago also easily manipulates Othello, like Roderigo, throughout the play. Othello is naive. He demonstrates that a few well-placed suggestions can alter his train of thought, such as when Iago was talking to Cassio and made Othello believe that the lieutenant was speaking of Desdemona instead of Bianca. On the whole, Othello was a weak character and a naive man. In contrast, Cassio's character is strong. He spoke about Othello with dignity and grace, which no other character in the play does. Also, Cassio showed extreme loyalty to the Moor. Cassio's only flaw is that he temporarily lost his power of reasoning when he was drunk and let himself be manipulated by Iago. All in all, Cassio is a good example of how a man should act; with dignity and honor. Likewise, Iago's character is also strong. He is an intelligent man as can seen in the soliloquy where he is hatching a plan to frame Cassio "to get his place "(I iii). In the soliloquy Iago's intelligence is revealed in the statement "How, How? - To abuse Othello's ear / That [Cassio] is too familiar with his wife."(I iii 396-39). Iago used his intelligence to think of a plan to frame Cassio and bring down Othello at the same time. Iago is also a confident man. Throughout the soliloquy Iago is confident "That the moor ...Will be tenderly led by the nose./ As asses are " (I iii 401- 404) and will be easily manipulated. However, if Iago had used his good character traits for good he would have been the hero of the play instead of Othello. On the whole, Shakespeare did an excellent job on setting the character traits for the male characters in the play: Roderigo was the "snipe"; Cassio, the noble gentleman; Othello, the fallen "noble Moor"; and Iago, the intelligent, confident and arrogant self-made villain. All the Characters in the play had some good traits but each of them had an appalling attribute that led to their downfall. ...read more.