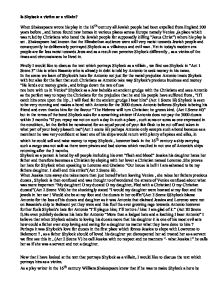 Is Shylock A Victim Or a Villain

Is Shylock a victim or a villain? When Shakespeare wrote his play in the 16th century all Jewish people had been expelled from England 300 years before , and hence found new homes in various places across Europe namely Venice ,(a place which was ruled by Christians who hated the Jewish people for supposedly killing "Jesus Christ") where his play is set . Shakespeare had known that the Elizabethan audience were still very racist towards Jewish people and consequently he deliberately portrayed Shylock as a villainous and evil man .Yet in today's modern era people are far less racist towards Jews and as a result can perceive Shylock differently , as a victim of the times and circumstances he lived in. Firstly I would like to discuss the text which portrays Shylock as a villain , we first see Shylock in "Act 1 Scene 3" this is when Basanio who is already in debt is told by Antonio to seek money in his name. In the scene we learn of Shylock's hate for Antonio not just for the racial prejudice Antonio treats Shylock with but also for the fact that such Christians as Antonio take way Shylock's precious business and money "He lends out money gratis , and brings down the rate of usa nce here with us in Venice" Shylock as a Jew beholds an ancient grudge with the Christians ...read more.

Perhaps it was Shylock's love for ducats in the first place which forces Jessica to elope with Lowrenzo to Belomont ? , as a father Shylock should of loved his daughter yet disrespected her ad treated her as a servant we first see this in , (Act 2 Scene V) he call Jessica with no respect and no manners "- what Jessica !" he calls her as if she was a servant and not a daughter. Now that I have looked at the text that portrays Shylock as a villain, I would like to discuss the text which portrays him as a victim. As a play writer in the 16th century William Shakespeare knew that if he was to make Shylock a hero he would be booed by the very racist Elizabethan audience, however there are some cases where perhaps a modern audience would feel sorry for a man who loses everything , while the Elizabethan audience would adore the suffering of a Jewish character they so much despise. Perhaps Shakespeare knew that racism towards Jews would eventually end and wrote his play for not only the present but the future as well ? We first see of the victimization of Shylock in (Act 1 Scene iii) while Antonio is asking for money Shylock can not believe the audacity of the Christian for them to ask him for money and replies "You ...read more.

this could be viewed as Shylock simply has a reputation in Venice of being an evil person and the dukes words are true, or it could be seen that the he is just being criticized behind his back , It is very clear that the duke is very bias towards Antonio the room is only inhabited by Christians and in the room Shylock is referred to as "Jew" not Shylock he is unnamed he is nameless like an animal , he is the lowest of low creatures according to the Christians to them he is a purely evil villain. Shylock is obviously being criticized by the Christians in the room and when he eventually does appear he has no idea of the dukes hate and bitterness towards him nor how bias he is towards Antonio. When entering the room Shylock has one thing and one thing only "having his bond" or in other words killing Antonio and taking revenge on the Christians. Shylock enters with 3 items a knife in which he hopes to use to cut the flesh of Antonio , some scales in which he hopes to way a "Pound" of Antonio's "fair flesh" and most importantly his precious "bond" in which he is very proud of , he honestly believes that with his bond he is within the law to kill a Christian despite a bias duke in his way. ...read more.