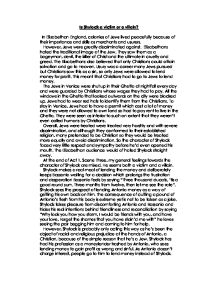 Is Shylock a victim or a villain?

Is Shylock a victim or a villain? In Elizabethan England, colonies of Jews lived peacefully because of their importance and skills as merchants and usurers. However, Jews were greatly discriminated against. Elizabethans hated the traditional image of the Jew. They saw them as a bogeyman, devil, the killer of Christ and the ultimate in cruelty and greed. The Elizabethans also believed that only Christians could attain salvation and go to Heaven. Usury was a career many Jews pursued but Christians saw this as a sin, so only Jews were allowed to lend money for profit. This meant that Christians had to go to Jews to lend money. The Jews in Venice were shut up in their Ghetto at nightfall every day and were guarded by Christians whose wages they had to pay. All the windows in the Ghetto that looked outwards on the city were blocked up. Jews had to wear red hats to identify them from the Christians. To stay in Venice, Jews had to have a permit which cost a lot of money and they were not allowed to own land so had to pay rent to live in the Ghetto. They were seen as inferior to such an extent that they weren't even called humans by Christians. Overall, Jews were treated were treated very harshly and with severe discrimination, and although they conformed to their established religion, many pretended to be Christian so they would be treated more equally and avoid discrimination. So the character of Shylock faced very little respect and sympathy before he'd even opened his mouth. The Elizabethan audience would of hated Shylock straight away. At the end of Act 1, Scene Three, my general feelings towards the character of Shylock are mixed. He seems both a victim and a villain. Shylock makes a real meal of lending the money and deliberately keeps Bassanio waiting for a decision which prolongs the frustration and desperation Bassanio feels by saying "Three thousand ducats, 'tis a good round sum. ...read more.

But all the terrible things Antonio has done to him has probably turned him this way and he is a deeply sensitive and isolated person at heart. When Tubal enters, Shylock asks him whether he's found his daughter yet, making it sound as though Shylock wants his daughter back. Shockingly, the genuine reason for his desperation for his daughter is revealed in his next comment when Shylock pretty much says his precious jewels and gold are more important than her and that he'd rather have them with him than his daughter! This makes Shylock a very shallow, cruel and vain person. He says somebody's probably stolen his treasures and he'd like to get revenge on them. So perhaps Shylock is a villain; he obviously cares for his gold more than his daughter. Shylock is extremely angry when Tubal tells him that his daughter's been spending all his money, especially when he's told that his daughter swapped one of her expensive rings for a monkey! He said he wouldn't have swapped the ring for a 'wilderness of monkeys'. He then continues to say that he will have the heart of Antonio if he forfeits his promise of paying Shylock back. I think overall Shylock is a villain as he doesn't care about his daughter, he'd much rather have his wealth. He's evil and just wants to hurt people. Despite the fact that Antonio has been very insulting and demeaning to him perhaps he should try to rise above his ignorance instead. In the court scene (Act Four, Scene One), Shylock is obsessed by getting his bond. He won't give a reason why but just says "I can give no reason, nor I will not, More than a lodg'd hate, and a certain loathing I bear Antonio, that I follow thus A losing suit against him" Bassanio says that he's cruel and Shylock responds by saying "I am not bound to please thee with my answer" Bassanio tries to convince him to take the money instead, ...read more.

This makes Shylock sound like a hypocrite because in his first speech he was trying to make Jews sound equal and similar to Christians and now he is trying to say that they are completely different races of people. It is clear Shylock is very obsessed by money. It has a real grip on him. He is more concerned that if his daughter were dead at his foot, her 'precious' jewels would still be in her ears. He thinks that not having his daughter is less of a loss than not having his jewels. He is upset that he couldn't get revenge on the thief, as he doesn't know who it is. He is a deeply self absorbed, money obsessed man. I think overall Shylock is a villain because of the evil way he thinks. Revenge is a natural instinct but self-control takes over feelings such as these. It's understandable that Shylock wanted his own back on Antonio for the cruel way he mistreated him, but taking his life is many a step too far. If you were spat on and called names it wouldn't provoke you to kill that person. You might say you wanted to kill them, but you never really would. Shylock is obviously a very, very mentally unstable and hurt man. He feels deeply isolated and pained. His deep feelings lead him to do the things he does and act in the unreasonable way he does. I think the reason Shylock is the way he is is because of Antonio's treatment of him. Shylock is the outsider and the person people look down on and it must be hard for him because people think of his religion as rubbish whereas to Shylock it's his biggest faith and the thing he believes in. I feel a bit sorry for him. He must be so confused, angry and upset inside, but killing someone is not acceptable at all. He should ignore ignorant people and get on with his life. The way he went around dealing with Antonio was evil, wicked and calculating. ...read more.