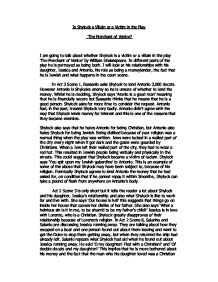 Is Shylock a Victim or a Villain in the Play &quot;The Merchant of Venice&quot;?

Is Shylock a Villain or a Victim in the Play

‘The Merchant of Venice?

I am going to talk about whether Shylock is a victim or a villain in the play ‘The Merchant of Venice’ by William Shakespeare. In different parts of the play he is portrayed as being both. I will look at his relationships with his daughter, Jessica and Antonio, his role as being a moneylender, the fact that he is Jewish and what happens in the court scene.

In Act 3 Scene 1, Bassanio asks Shylock to lend Antonio 3,000 ducats. However Antonio is Shylocks enemy so he is unsure of whether to lend the money. Whilst he is deciding, Shylock says ‘Atonio is a good man’ meaning that he is financially secure but Bassanio thinks that he means that he is a good person. Shylock asks for more time to consider the request. Antonio had, in the past, treated Shylock very badly. Antonio didn’t agree with the way that Shylock lends money for interest and this is one of the reasons that they became enemies.

Shylock also says that he hates Antonio for being Christian, but Antonio also hates Shylock for being Jewish. Being disliked because of your religion was a normal thing when the play was written. Jews were locked in a walled part of the city every night when it got dark and the gates were guarded by Christians. When a Jew left their walled part of the city, they had to wear a red hat. This resulted in Jewish people being verbally and physically in the streets. This could suggest that Shylock became a victim of racism. Shylock says ‘You spit upon my Jewish gaberdine’ to Antonio. This is an example of some of the abuse that Shylock may have been subject to, because of his religion. Eventually Shylock agrees to lend Antonio the money that he had asked for, on condition that if he cannot repay it within 3months, Shylock can take a pound of flesh from anywhere on Antonio’s body.

Act 2 Scene 3 is only short but it tells the reader a lot about Shylock and his daughter, Jessica’s relationship and also what Shylock is like to work for and live with. She says ‘Our house is hell’ this suggests that things go on inside her house that causes her dislike of her father. She also says ‘What a heinious sin is it in me, to be aham’d to be my father’s child!’ Jessica is in love with Lorenzo, who is a Christian. Shylock greatly disapproves of their relationship because of Lorenzo’s religion. In Act 2 Scene 8, Salarino and Salanio are discussing Jessica running away. They are talking about how they escaped on a boat and one person found out about them leaving and went to get the Duke to stop them getting away, but when they returned the ship had already left. Salanio repeats what Shylock had aid when he found out about Jessica running away. He said ‘O my daughter! Fled with a Christian!’ and ‘Of double ducats and my daughter!’ This implies that he is more bothered about his money and the fact that the man who his daughter loved was a Christian than his daughter disappearing and the possibility of him never seeing her again. Shylock could be portrayed as more of a villain in this part of the play, because of his treatment of his daughter and the way that he is more bothered about his money than his daughter. It appears that he would rather have his money, than his daughter. Lancelot is also leaving Shylocks house where he had been Shylock and Jessica’s servant as he dislikes him and he is going to become Bassanio’s servant.

When Antonio’s ships get wrecked, he gets arrested because he can’t pay back the money that he borrowed from Shylock. Shylock is adamant that he will get his pound of flesh from Antonio; however Salanio says ‘I am sure the duke will never grant this forfeiture to hold’ meaning he doesn’t believe that Shylock will get what he wants. In this part of the play, Shylock could be portrayed as being a villain because he wants to go ahead with taking a pound of Antonio’s flesh even though it may mean the end of Antonio’s life. Shylock appears to show no sympathy towards Antonio which gives the impression that he is mean and cold hearted.

In Act 4, Scene 1 it will be decided if Shylock should get the pound of flesh from Antonio that was promised to him in a bond. From the start, Shylock is referred to as ‘the Jew’ and is said to be ‘incapable of pity, void and empty’. This could cause the audience to have mixed feelings towards Shylock as the way he is referred to could be seen as racism, therefore creating sympathy. However, the Duke’s description of him gives the impression that Shylock is a villain. Most people in the courtroom are against Shylock and don’t want him to have his deal approved. Bassanio produces six thousand Ducats and offers them to Shylock in exchange for him allowing Antonio to keep his flesh, but Shylock refuses. Shylocks lack of sympathy and conscience could make the audience believe that he is a villain in this part of the play.

When Portia appears in the court, she is dressed as a man. She is introduced as a doctor of laws and no one suspects that she is anything other than that. Just before Shylock prepares to slice the flesh, Portia asks ‘Have by some surgeon, Shylock, on your charge, to stop his wounds, lest him bleed to death?’ to try and stop the deed going ahead but Shylock replies that it isn’t mentioned in the bond. Antonio prepares to have the flesh sliced from his body and says goodbye to Bassanio, this is quite an emotional part of the scene and could increase the audiences hate for Shylock. Once agin, Shylock is close to slicing into Antonio when Portia interrupts. She announces that in the bond, nothing is said about blood and because of this; Shylock must do it without a drop of blood leaving Antonio’s body. Shylock then agrees to take the money instead, but Portia steps in and says that Shylock should only get the penalty but everyone knows that is not possible.

It is then said that it is against the law to try in any way to take the life of another, therefore, Shylock is ordered to give half his money to the state and half to Antonio as a punishment. However, Antonio tells Shylock that he can keep his half of the money on condition that he leaves it to his daughter and her new Christian husband when he dies. In return for that, Antonio tells Shylock to immediately become a Christian.

In this part of the play, Shylock could be seen as a villain when he insists on going through with the bond, but then could look like a victim when he looses his money and religion.

In conclusion, I think that the audience of the play would see Shylock as a victim and a villain in different parts of the play. Shylocks actions cause him to be portrayed as a villain however his treatment by others makes him seem like a victim.