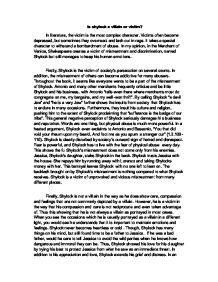 Is Shylock a villain or victim?

Is shylock a villain or victim? In literature, the victim is the most complex character. Victims often become depressed, but sometimes they overreact and lash out in rage. It takes a special character to withstand a bombardment of abuse. In my opinion, in the Merchant of Venice, Shakespeare creates a victim of mistreatment and discrimination, named Shylock but still manages to keep his human emotions. Firstly, Shylock is the victim of society's persecution on several counts. In addition, the mistreatment of others can become addictive for many abusers. Throughout the book, it seems like everyone wants to be a part of the mistreatment of Shylock. Antonio and many other merchants frequently criticize and belittle Shylock and his business, with Antonio "rails even there where merchants most do congregate on me, my bargains, and my well-won thrift". By calling Shylock "a devil Jew" and "he is a very Jew" further shows the insults from society that Shylock has to endure in many occasions. ...read more.

Shylock is a victim of unprovoked and vicious mistreatment from many different places. Finally, Shylock is not a villain in the way as he does show care, compassion and feelings that are not commonly depicted by a villain. However, he is a victim in the way that his compassion and care is not reciprocate and even taken advantage of. Thus this showing that he is not always a villain as portrayed in most cases. When you see the occasions which he is usually portrayed as a villain in a different light, you would see he understands that it is important to maintain emotions and feelings. Shylock never becomes heartless or cold. Though, Shylock has many things on his mind, but still found time to be a father to Jessica. If he was a bad father, would he care to tell Jessica to avoid the wild parties when he knows how dangerous and immoral they can be. ...read more.

In addition, when Salerio asks Shylock what good would Antonio's flesh do Shylock if Antonio forfeits the bond, he replies, "If it will feed nothing else, it will feed my revenge. He hath disgraced me, laughed at my losses, mocked at my gains, scorned my nation," The quote clearly portrays Shylock remembering every single thing that Antonio has done to him. He calculates what Antonio has done to him and tries to revenge the wrongs done to him by murdering Antonio, through these means shows his vengeful and devious attitude commonly associated with that of a villain. However, in a nutshell, Shylock is a deep and interesting character that can be analysed in many ways. On the surface he appears to be a bad person that does evil to everyone. There is a reason why he reacts the way he does. Shylock is mistreated and discriminated against in a variety of ways. He never stops being a human worthy of respect and dignity. Occasionally he reacts negatively, but he is basically a product of his environment hence a tragic victim. Done by Benjamin Lim :D Class: 2D ...read more.

The candidates brief introductory paragraph is well written and engaging, however it is missing some key points that make up a strong introduction. It is essential to state any questions that you plan to answer, in this case is Shylock ...

The candidates brief introductory paragraph is well written and engaging, however it is missing some key points that make up a strong introduction. It is essential to state any questions that you plan to answer, in this case is Shylock a villain or a victim, furthermore it is necessary to outline the main points of your discussion. In this instance it would also be suitable to give a brief description of Shylock as a character, who he is, what he does and his overall personality.

The candidate gives a reasonable attempt at analysing Shylock as a character, they discuss what he is going through, mention his feeling and give evidence to back up their ideas by using quotations from the play. This is exactly how this type of essay should be approached. However the candidate could have improved this essay by including facts gathered from independent research, for example it would be appropriate to mention how people of Jewish faith were treated at the time this play was written. This additional information helps the reader understand the characters and tends to make the essay more interesting to read. Finally the candidates conclusion is weak, it is essential that you answer the set question and give personal opinions when reasoning this answer, which the candidate does not do. As well as this you should summarise your key points, this helps to draw the essay to a close. A strong conclusion will also leave the reader with a good impression.

The candidate fails to mention any appropriate technical terms, for this level of qualification it is necessary to discuss Shakespeare's use of linguistic technique, in particularly the use of metaphors, similes and alliteration etc and how this adds to the play. There are some spelling issues, in particularly some americanisms, for example critisise should be spelt with an Ã¢â‚¬ËœsÃ¢â‚¬â„¢ instead of a Ã¢â‚¬ËœzÃ¢â‚¬â„¢ (criticize) be careful of these. In addition there are some typos in this essay. You should always proof read your work to avoid these kind of mistakes.