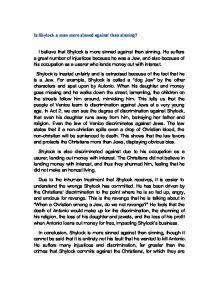 Is Shylock More sinned than sinning?

Is Shylock a man more sinned against than sinning? I believe that Shylock is more sinned against than sinning. He suffers a great number of injustices because he was a Jew, and also because of his occupation as a userer who lends money out with interest. Shylock is treated unfairly and is ostracised because of the fact that he is a Jew. For example, Shylock is called a "dog Jew" by the other characters and spat upon by Autonio. ...read more.

Even the law of Venice discriminates against Jews. The law states that if a non-christian spills even a drop of Christian blood, the non-christian will be sentenced to death. This shows that the law favors and protects the Christians more than Jews, displaying obvious bias. Shylock is also discriminated against due to his occupation as a usurer, lending out money with interest. The Christians did not believe in lending money with interest, and thus they shunned him, feeling that he did not make an honest living. ...read more.

In conclusion, Shylock is more sinned against than sinning, though it cannot be said that it is entirely not his fault that he wanted to kill Antonio. He suffers many injustices and discrimination, far greater than the crimes that Shylock commits against the Christians, for which they are partly reponsible. It may be true that Shylock would not have acted as such towards the Christians if they had not discriminated against him and his religion in the first place. ...read more.