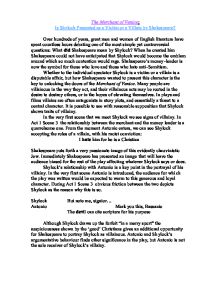 Is Shylock Presented as a Victim or a Villain by Shakespeare?

The Merchant of Venice: Is Shylock Presented as a Victim or a Villain by Shakespeare? Over hundreds of years, great men and women of English literature have spent countless hours debating one of the most simple yet controversial questions: What did Shakespeare mean by Shylock? When he created him Shakespeare could not have anticipated that Shylock would become the emblem around which so much contention would rage. Shakespeare's money-lender is now the symbol for those who love and those who hate anti-Semitism. Whether to the individual spectator Shylock is a victim or a villain is a disputable affair, but how Shakespeare wanted to present this character is the key to unlocking the doors of the Merchant of Venice. Many people are villainous in the way they act, and their villainous acts may be rooted in the desire to destroy others, or in the hopes of elevating themselves. In plays and films villains are often antagonists in story plots, and essentially a threat to a central character. It is possible to see with reasonable supposition that Shylock shows traits of villainy. In the very first scene that we meet Shylock we see signs of villainy. In Act 1 Scene 3 the relationship between the merchant and the money lender is a quarrelsome one. From the moment Antonio enters, we can see Shylock accepting the roles of a villain, with his racist conviction: I hate him for he is a Christian Shakespeare puts forth a very passionate image of this evidently chauvinistic Jew. ...read more.

thy desires are wolfish, bloody, starved and ravenous Shylock readily meets these accusations with his 'bloody' desires to carry out the forfeit in order to feed his desire for revenge. Shakespeare interprets his villainy as being based on his religion. Shylock shows this in his very first scene, where he believes Antonio has wronged him because he is a Jew. This again links to the definition of villainy, because his actions have been rooted in the desire to destroy others (i.e. Antonio - for being a Christian). This is reinforced by the suspiciousness shown by Bassanio when the bond was drawn up months ago. It proves that the Christians were right yet again - right not to trust Shylock. Shakespeare presents Shylock as little more than an animal in some scenes, but in others he shows signs of being victimised. A victim is someone punished unfairly and/or discriminated against. In the very first scene that we meet Shylock, Shakespeare has put forth a fairly weighted portrayal of him. From his initial words when Antonio enters to his notorious bond, many would view Shakespeare's interpretation of Shylock as entirely villainous. However, one can find evidence to suggest the contrary. He hates our sacred nation, and he rails Shylock's aside speech is likely to be honest as nobody on the stage can hear him. The accusations made upon Antonio's head give no information to suggest lack of integrity on Shylock's part. Antonio has insulted Shylock, and is prejudiced against him. ...read more.

Shakespeare secretly portrays this as injustice upon Shylock in his use of the word 'stole'. It was Lorenzo (and Jessica) who stole from him, and now it is Shylock who must give him all he owns. Shakespeare truly gives Antonio the last laugh when he makes Shylock become a Christian. The one thing that Shylock has always stuck by was his faith, and the fact that he must become a Christian, the thing that he hates creates a great deal of sympathy for him. This punishment appears most unjust, and Shakespeare uses Shylock's response to invoke some sympathy from his audience: I pray you give me leave to go from hence; I am not well This powerful imagine of an unwell man, broken in spirit shows that Shakespeare did want to present part of Shylock as both a villain and a victim. Shylock is the villain of The Merchant of Venice. Shakespeare presented this Jewish character, infamous for his lust for money, and his hatred of Christians in order to appeal to the anti-Semitic audience at the time. Nevertheless, this is not the sole reason why Shakespeare presents this individual as villainous. Shakespeare has made it clear that Shylock has almost been forced into this villainous role, through his victimization: Thou call'dst me dog before thou hadst cause, But since I am a dog beware my fangs I feel that Shakespeare used this bigoted, money-orientated Jew to reflect on the true nature of society today, and how people should treat one another. ...read more.