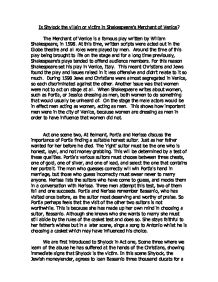 Is Shylock the villain or victim in Shakespeare's Merchant of Venice?

Is Shylock the villain or victim in Shakespeare's Merchant of Venice? The Merchant of Venice is a famous play written by William Shakespeare, in 1598. At this time, written scripts were acted out in the Globe theatre and all roles were played by men. Around the time of this play being brought to life on the stage and for a long time previously, Shakespeare's plays tended to offend audience members. For this reason Shakespeare set his play in Venice, Italy. This meant Christians and Jews found the play and issues raised in it less offensive and didn't relate to it so much. During 1598 Jews and Christians were almost segregated in Venice, so each discriminated against the other. Another issue was that women were not to act on stage at all. When Shakespeare writes about women, such as Portia, or Jessica dressing as men, both women to do something that would usually be unheard of. On the stage the male actors would be in effect men acting as women, acting as men. This shows how important men were in the city of Venice, because women are dressing as men in order to have influence that women did not. Act one scene two, At Belmont, Portia and Nerissa discuss the importance of Portia finding a suitable honest suitor. ...read more.

It is in Act two Scene five that the first conversation occurs between Shylock and Jessica. During this he orders her about as if she were a servant and mentions nothing about her well being, only instructs her to look after that of his house. These quotes show examples of Shylock treating his daughter with no respect, as he is overprotective, etc, 'Hear you me, Jessica', 'Lock up my doors and when you hear the drum... Nor thrust your head into the public street... But stop my house's ears...Let not the sound of shallow foppery enter'- When the Christian parade is running outside. In act two scene eight, Salerio and Solanio are constant tormentors of Shylock and mock him at every opportunity with these words, 'as the dog Jew did utter in the streets in the streets: "My daughter! O my ducats! O my daughter!"' They mock him for speaking aloud in such shock in the streets when Shylock was repeating 'My daughter! O my ducats!'. This is quite important because here Shylock is weighing out each loss- his daughter, and his wealth. The repetition of each daughter and each ducats seems to be equal but then his words sway as Shylock repeats O my ducats further. This suggests that Shylock would prefer to have his ducats back that his daughter Jessica. ...read more.

In conclusion, I feel that ultimately Shylock is a villain. The way he treats those he is close to, for example his daughter Jessica exposes his vindictive and very evil character. He lets his lust for vengeance take over, and throughout the play Shylock shows no mercy towards Antonio. I feel that Shakespeare intended Shylock to be the victim, Shylock made the interesting character created to challenge the pre-conceptions of the Elizabethan era. Shylock is naive in the way that he believes that he can take on the Christians and win, knowing that at the time of the play Venation law is designed to serve the best interests of the Christians. Shylock's punishment is possibly made to harsh AS Shylock is made to convert to Christianity. It could be argued that Portia had taken Shylock's punishment too far. Shylock's life is spared but he may be better off dead because he has nothing to live for. Remembering that all his wealth has been taken from him, and his daughter has left. So Shylock can nolonger be the rich moneylender that he has been in the past. Although Shylock had attempted to pursue his revenge he still has the audience's sympathy because of the unfair and harsh punishment he has been given. It is unjust that Shylock's punishment is formed from his crime, but made on the basis of his religion ultimately. Shylock should be seen as the villain of the Merchant of Venice for this. ...read more.