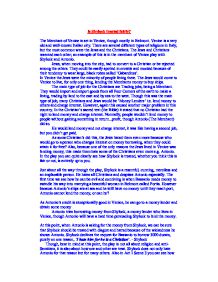 Is Shylock treated fairly? The Merchant of Venice is set in Venice, though mostly in Belmont. Venice is a very old and well-known Italian city. There are several different types of religions in Italy, but the most common were the Jews and the Christians. The Jews and Christians resented each other; an example of this is in the merchant of Venice play with Shylock and Antonio. Jews, when moving into the city, had to convert to a Christian or be rejected among the others. They could be easily spotted in crowds and mocked because of their tendency to wear large, black robes called 'Gabardines'. In Venice the Jews were the minority of people living there. The Jews would come to Venice to live, for only one thing, lending the Merchants money to buy ships. The main type of job for the Christians are Trading jobs, being a Merchant. They would import and export goods from all Four Corners of the earth to make a living, trading by land to the east and by sea to the west. Though this was the main type of job, many Christians and Jews would be 'Money Lenders' i.e. lend money to others and charge interest. However, again this caused another major problem in this country. In the Christian's sacred text (the Bible) it stated that no Christian had the right to lend money and charge interest. Normally, people wouldn't lend money to people without gaining something in return...profit, though Antonio (The Merchant) did so. He would lend money and not charge interest, it was like having a second job, but you didn't get paid. ...read more.

Is she sure that she wants to leave the house and leave Shylock alone, yes. 'Our house is hell'...'I have a father, you a daughter, Lost' This is where a very interesting parallel comes in here. Shylock leaves Jessica, his "trustworthy daughter" to look after the house whilst he reluctantly goes to dinner with Bassanio. Ironically, whilst he is gone, Jessica steals all his possessions and then escapes with Lorenzo. Do you think this is fair on Shylock? You may also feel very sorry for Shylock when he finds out about the horrific tragedy of his daughter leaving. This part is also very ironic because he seems more concerned with his money than with his daughter. 'My Ducats! Oh my daughter!' Again, is he treated fairly? In Act 3 Shylock is so upset and mad, he takes his revenge out on Antonio by listing all the evil things that Antonio has done to him. Shylock states that Jews have the same 'organs, dimensions, senses, affections, passions...': 'If you prick us, do we not bleed?' We may agree with Shylock on how his own flesh and blood rebelled against him and took of with his possessions . However, any sympathy that is gained towards Shylock by the audience on his compassionate speech quickly disappears as he complains about his daughter. His only concerns are about his ducats, his jewels and now more threateningly, his revenge. 'Why there, there, there, there, a diamond gone cost me 2000 ducats...' He talks about torturing Antonio and gaining his revenge. 'I'll torture him! I am glad of it' As you can see, he is not really one bit concerned about his daughter but just his ducats. ...read more.

He decides to take nothing and is punished by the court. The Duke does not have Shylock executed but instead decides one half of Shylocks possessions will be taken and the other half will go to Lorenzo and Jessica. Perhaps the crowning fate that Antonio demanded Shylock go through was the worst. Shylock was to be converted to a Christian. The one thing that Shylock hated, the Christians, he was to be. How can someone deny you the right to follow your own religion just because you are different. It's like the Nazis killing all the Jews just because they were different. I think that it is very wrong and that shylock has not been treated fairly. He has gone through enough I think. Losing all his possessions and losing his daughter is enough for one man to go crazy. Taking the rest of his possessions e.g. his house and converting him to a Christian is just taking it too far I think. Overall I agree that Shylock had done a lot of evil things in the play and I realise that he is not a real character, but this probably happened in real life in the time the play was wrote. Shylock, I think, had the right to be evil towards Antonio but not to take it as far as killing him. Antonio was very nasty and unsympathetic towards Shylock and I think Antonio should have been punished for that too. Racism seemed to be acceptable in those times, I don't think that kind of behaviour would be tolerated at all in the present time. Racism is very wrong and I do not approve of how Shylock was treated to a certain extent. ?? ?? ?? ?? ...read more.