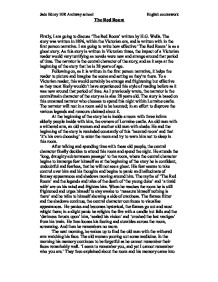 Is 'The Red Room' by H.G Wells a good ghost story?

Firstly, I am going to discuss 'The Red Room' written by H.G. Wells. The story was written in 1896, within the Victorian era, and is written with in the first person narrative. I am going to write how effective 'The Red Room' is as a ghost story. As this story is written in Victorian times, the impact of a Victorian reader would very terrifying as novels were new and strange around that period of time. The narrator is the central character of the story, and as it says at the beginning of the story that he is 28 years of age. Following on, as it is written in the first person narrative, it helps the reader to picture and imagine the scene and setting as they're there. To a Victorian reader, this would certainly be strange and frightening but effective as they most likely wouldn't have experienced this style of reading before as it was new around that period of time. As I previously wrote, the narrator is the central/main character of the story as is also 28 years old. The story is based on this unnamed narrator who chooses to spend this night within Lorraine castle. ...read more.

She doesn't say that much but when she does speak she speaks with wisdom. Near the end of the story she says that she is convinced that the countess haunts the room, 'it is the poor young countess who was frightened-' she also seems caring to worry about a soul that she doesn't know and to provide medicine for him. The old man with the shade, he looks more ill and matured than the other two, by being more bent, more wrinkled and more aged. "He has yellow decaying teeth,' his eyes were covered with shade, 'appearing below his lower lip appearing averted, a yellow and pale face glooms as his raises his head and he also holds a single crutch in his hand." Like the old woman, he doesn't talk all that much but he is wiser than them and only speaks when necessary. The old man questions the central character once throughout the first part of the story, 'And are you really going?' questioning him like he cannot believe he is going to the Red Room. I think the old man might be superstitious but not as much and, unlike the other two as he doesn't seem to panic so much. ...read more.

And when he narrates at one point he talks as if he will come across a ghost and expects one to come by saying, 'when the ghost will come'. And he also claims he has to 'reassure himself'; if he was confident at that point there would be no need to reassure himself. In conclusion, the effectiveness of 'The Red Room' as a ghost story varies depending on the reader. If the reader was Victorian within the late 19th century and very early 20th century the impact would be alarming and bloodcurdling as the gothic genre was new, as were novels, and the reality of ghost and the other supernatural is brought to life within the first person narrative. However, now, the story would not have such a terrifying impact as novels, the first person narrative and gothic genre have been used many times before and I am familiar with the style of writing. As a whole I think 'The Red Room' is a good ghost story and is effective as it has all the equipment to produce a great ghost story novel even though it conclude without having a real, existent ghost haunting 'The Red Room.' Jade Edney 10R Archway school English coursework The Red Room ...read more.