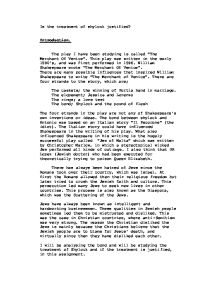 Is the treatment of shylock justified in

Is the treatment of shylock justified? Introduction. The play I have been studying is called "The Merchant Of Venice". This play was written in the early 1590's, and was first performed in 1596. William Shakespeare wrote "The Merchant Of Venice". There are many possible influences that inspired William Shakespeare to write "The Merchant of Venice". There are four strands to the story, which are; The caskets; the winning of Portia hand in marriage. The elopement; Jessica and Lorenzo The rings; a love test The bond; Shylock and the pound of flesh The four strands in the play are not any of Shakespeare's own inventions or ideas. The bond between shylock and Antonio was based on an Italian story "Il Pecorone" (the idiot). The Italian story could have influenced Shakespeare in the writing of his play. What also influenced Shakespeare in his writing is the hugely successful play called "Jew of Malta" which was written by Christopher Marlow, in which a stereotypical wicked Jew performed all kinds of outrage. I also think that DR Lopez (Jewish doctor) who had been executed for theoretically trying to poison Queen Elizabeth. There has always been hatred of Jews since the Romans took over their country, which was Israel. At first the Romans allowed then their religious freedom but later tried to crush the Jewish faith and culture. This persecution led many Jews to seek new lives in other countries. This process is also known as the Diaspora, which was the Scattering of the Jews. Jews have always been known as intelligent and hardworking businessmen. These qualities in Jewish people sometimes led them to be mistrusted and disliked. ...read more.

He calls him a devil, which is not a nice way to refer to a human being whatever their religion. Shylock disliked Antonio because Antonio lends out maney with no interest, this clearly affects Shylock's business: "...He lends out money gratis, and brings down the rate of usance here with us in Venice..." Act 1 scene 3 lines 36-37 This extract from the play tells us that Christians did not charge interest, when they lent out money whereas people like Shylock made their profits from interest, this did not please the Christian community. This could have created negative attitudes towards all Jewish people in the 1950's Christians thought lending money and taking interest as well is a big sin. Antonio had also saved many of Shylock's customers by defaulting on their loans, this meant Shylock sis not collect any interest therefore he made no profits, which helped increase his hatred for the Christians. Shylock loathes Antonio for hating the Jewish religion. "...He hates our sacred nation, and he rails..." Act 1 scene 3 line 40 This quote from the play tells us readers that the Christians hated the Jewish. There are many things I have mentioned which tell us what led Shylock in wanting to kill the Christian Antonio. Jessica was ashamed to be the daughter of Shylock the Jew; "...To be ashamed to be my father's child! but though I am a daughter to his blood I am not to his manners..." Act 2 scene 4 lines 16-18 Jessica quotes that she is ashamed to be shylocks daughter because of the way he treats people. ...read more.

Act 2 scene 2 line 20 Lancelot who is a servant said the quote above. This shows us that even the lowest of the lowest disliked the Jewish people. He was also referred to as: "...Currish Jew..." Act 4 scene 1 lines 288 "...Inexecrable dog..." Act 4 scenes 1 line 128 "...In human wretch..." Act 4 scenes 1 line 4 I think William Shakespeare gave these titles to shylock because in the 1590's this is how the Jewish people were named. This made Shylock appear something other than human; I think this was because he was a Jew. I think William Shakespeare was not racist against the Jewish people. I think the way he wrote the play is very interesting in many ways because it leads to a lot of different ideas from a lot of different people, which is a good thing. In the 1590's the people never thought they were being racist it was a normal thing to not treat the Jewish community in a correct manner. The following quote give me a reason why I think William Shakespeare was not racist: "...I am a Jew. Hath not Jew eyes? Hath not Jew hands, organs, dimensions, senses, affections passions? Fed with the same food, hurt with the same weapons, subject to the same diseases, healed by the same means, warmed and cooled by the same winter and summer as a Christian is? If you prick us, do we not bleed? If u tickle us, do we not laugh? If you poison us do we not die?..." Act 3 scene 1 lines 46-52 In my opinion William Shakespeare wanted Christians to realise that Jews were also human and should be treated like one too. ...read more.