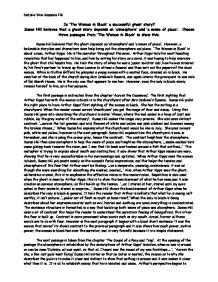 Is 'The Woman in Black' a successful ghost story? Susan Hill believes that a ghost story depends on 'atmosphere' and 'a sense of place'. Choose three passages from 'The Woman in Black' to show this. Susan Hill believes that the ghost depends on 'atmosphere' and 'a sense of place'. However, a believable storyline and characters does help bring out the atmosphere and place. 'The Woman in Black' is about a man, Arthur Kipps. He is the narrator throughout the novel. Arthur Kipps tells his most haunting revelation that had happened to him, and how by writing his story as a novel, it was hoping to help exorcise the ghost that still haunts him. He tells the story of when he was a junior solicitor and, how he was ordered by his firm's partner to travel up from London to attend a funeral and then sort out the papers of the dead woman. While in Crythin Gifford he glimpses a young woman with a wasted face, dressed all in black. He sees her at the back of the church during Mrs Drablow's funeral, and again later in the graveyard to one side of Eel Marsh House. He is the only one that appears to see her. However, soon the lady in black slowly reveals herself to him, as is her purpose. The first passage is extracted from the chapter 'Across the Causeway'. The first sighting that Arthur Kipps has with the woman in black is in the churchyard after Mrs Drablow's funeral. ...read more.

'. 'Across the sky, a few last gulls went flying' Susan Hill writes so that no detail is wasted, the reason as to why she describes the gulls is to make it clear and distinct to show that nothing is around and it also makes it clear what time it is. It is all to establish mainly that he is isolated and alone. Arthur's perspective begins to change towards the end of the first paragraph and he becomes more conscious about what is around him 'Once or twice, I glanced over my shoulder...' Susan Hill uses repetition to emphasise that the water is coming in hence Arthur will get cut off by the tide, 'quite silent, quiet slow'. Here precise detail is used to help the reader's imagination. 'I have never been quite so alone, nor felt quite so small in a vast landscape before...' Susan Hill helps the readers to imagine where Arthur is, a vast landscape with this tiny figure, and it puts into perspective just how alone he is. The atmosphere changes in the third paragraph, as the tension is built when Arthur realises that he can no longer see, due to the fog and darkness of the evening closing in. Susan Hill gets the atmosphere through the description, and emphasis on the fact that Arthur has gone from the known, his home London, to the unknown, Crythin Gifford. This is shown when Arthur explains about the fog of Crythin Gifford is different to the fog he has experienced in London 'It smelled and tasted different from the yellow filthy fog of London...' ...read more.

In the next paragraph Arthur mentions the chair rocking in a one word sentence 'Rocking' this is to make it plain and simple and dramatic. Kipps then relates the rocking chair to his childhood days, care, and warmth. He associates the noise of the rocking chair against the floor as a sound of security, a protected feeling. 'It was the sound of the wooden runners of my nurse's rocking chair, when she has sat beside me very night while I went to sleep...' There is a precise description, of the bed and the fireplace, which helps the reader visualize every. 'As I watched, stared until I could stare no harder, it rocked gently...' the question Arthur is asking himself 'why is it rocking?' He is asking himself as well as the reader. '...someone has just got out of it' However Arthur is the only one in the house. There is a sense of unease as the windows are all closed so no one can get out. Susan Hill makes the readers ask themselves questions why? Who could it be? She keeps the reader in suspense. Susan Hill Believes that a good ghost story depends on the 'atmosphere' and 'a sense of place'. There are many points which a good ghost story should have unfamiliarity, a mystery, description and much more. However I personally believe that without a believable characters and storyline there is no basis of having atmosphere or a sense of place. So overall, yes a ghost story does depend on 'atmosphere' and 'a sense of place' but it must contain a believable story line with characters. Natalie Vive-Kananda 11k ...read more.