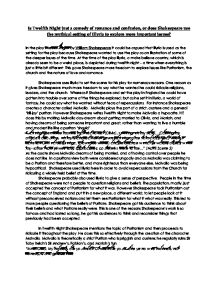 Is Twelfth Night just a comedy of romance and confusion

Is Twelfth Night just a comedy of romance and confusion, or does Shakespeare use the mythical setting of Illyria to explore more important issues? In the play Twelfth Night by William Shakespeare it could be argued that Illyria is used as the setting for the play because Shakespeare wanted to use the play as an illustration of some of the deeper issues of the time. At the time of the play Illyria, a make believe country, which is already seen to be a weird place, is depicted during twelfth night - a time when everything is just a little bit different. This gave Shakespeare more freedom to explore issues like Puritanism, the church and the nature of love and romance. Shakespeare uses Illyria to set the scene for his play for numerous reasons. One reason as it gives Shakespeare much more freedom to say what he wanted he could ridicule religions, leaders, and the church. Whereas if Shakespeare and set the play in England he could have gotten into trouble over some of the things he explored; but as he set it in Illyria, a world of fantasy, he could say what he wanted without fears of repercussions. For instance Shakespeare creates a character called Malvolio. ...read more.

Shakespeare here is turning the audience against Malvolio, and Malvolio here is being a stereotypical Puritan, so Shakespeare is slyly turning the audience against Puritanism in general. Shakespeare was probably so against the Puritans as he was more or less the complete opposite of one. The Puritans wanted to ban the theatre, Shakespeare whole life was centred on the theatre. The Puritans had very strict rules about marriage and the like whereas Shakespeare is known for 'sleeping around' and basically not following any Puritanical ethics. Thus Shakespeare decided to write Twelfth Night with a Puritan character so he could get across his views on the belief. However Shakespeare has some other views on Puritans too. In Twelfth Night he later portrays Malvolio to be a hypocrite. ""Having been three months married to her [Olivia], sitting in my state... Calling my officers about me, in my branched velvet gown; having come from a day-bed, where I have left Olivia sleeping... I frown the while; and perchance wind up watch, or play with my--some rich jewel. Toby approaches; courtesies there to me..." (Act 2 Scene 5) Malvolio is fantasizing about Olivia, and having power, and day-dreaming about being wealthy etcetera, thus showing Malvolio to be a hypocrite, as puritans are supposed to have a very pure, humble and clean life and want nothing more than God himself. ...read more.

They are irresponsible and do not foresee consequences they simply want to have a good time - no matter who they inconvenience. "ANDREW: Nay, my troth, I know not: but I know, to be up late is to be up late. TOBY: ...Does not our life consist of the four elements? ANDREW: Faith, so they say; but I think it rather consists of eating and drinking. TOBY: Thou'rt a scholar; let us therefore eat and drink. Marian, I say! A stoup of wine!" (Act 2 Scene 3) As the quote shows the two were often drunk and insisted on keeping company with the servants of the house such As Mariah and Fabian, as well as a fool called Feste. This behaviour would have been frowned upon in Shakespeare's days. So Shakespeare's audiences would have frowned upon the nobles wishing them to be more responsible, again making the audience think about their own preconceived notions about the governors of the land. So in conclusion Shakespeare's Twelfth Night has the setting of Illyria, a mythical place, for many reasons. It gives him more freedom, a chance to give his audience a sense of perspective on many issues such as Puritanism, and lets Shakespeare be satirical with no repercussions. So Twelfth Night does explore deeper issues of Victorian society, but most importantly he uses the play to get his audiences to reconsider what they had previously accepted. ...read more.